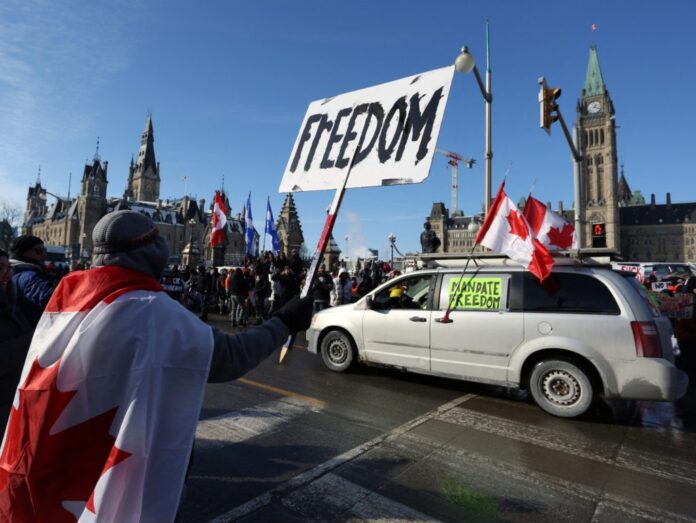 The poll, which was released by the Angus Reid Institute on Monday, claims that 54 per cent of Canadians now want to see an end to all restrictions and let Canadians manage their own risk in their exposure to the Wuhan coronavirus.

The poll is a 15 per cent increase since early January when a majority of Canadians were not in favour of scrapping the restrictions.

Across the Canadian provinces, only those in the Atlantic region saw the majority of people opposed to scrapping the restrictions, while over six in ten people wanted restrictions to end in Saskatchewan and just under six in ten in the French-speaking province of Quebec.

Quebec has seen some of the most restrictive policies during the coronavirus pandemic in Canada, including curfews and more recently, a planned “significant” tax on unvaccinated people was announced by Quebec premier Francois Legault, although that has now been abandoned.

Canada has so seen other restrictions placed on the unvaccinated, including a ban on commercial air travel, and a ban on train travel for those who are not vaccinated against the coronavirus.

Unlike other countries where recovery from the virus is part of health passports along with testing negative for the virus, Canadian vaccine passports are only eligible to those who are fully vaccinated.

The new poll comes as thousands of people joined a protest over the weekend in Ottawa as part of the Freedom Convoy of truckers against vaccine mandates for cross-border travel between Canada and the United States, which was implemented by both countries in January.

On Monday, Canadian Prime Minister Justin Trudeau, who is isolating after testing positive for the coronavirus and left Ottawa for security reasons, accused protestors of racism and hatred.

“Over the past few days, Canadians were shocked and, frankly, disgusted by the behaviour displayed by some people protesting in our nation’s capital. I want to be very clear: we are not intimidated by those who hurl insults and abuse at small business workers and steal food from the homeless,” Trudeau said.

“We won’t give in to those who fly racist flags. We won’t cave to those who engage in vandalism or dishonour the memory of our veterans,” he added.