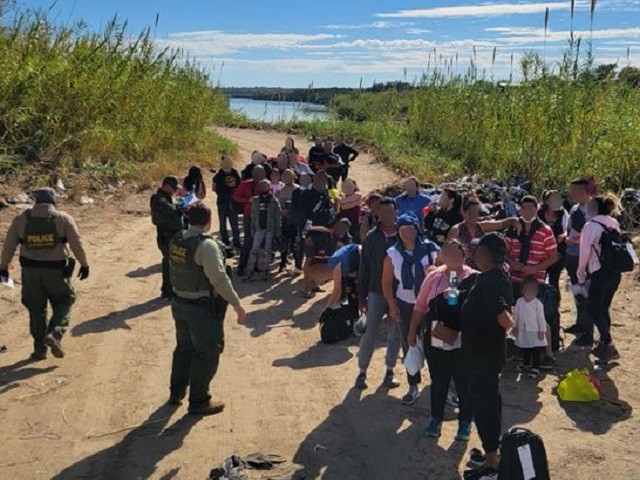 Just 38 percent of the border-state Latinos support Biden’s border policies, which have invited at least 1.5 million migrants over the border and into Americans’ jobs, housing, schools, and communities.

The high support among Texas Latinos for pro-American policies is good news for the state’s Governor Greg Abbott. He is facing election this year, and his strong border enforcement policy gets 45 percent support among Latinos. That result is close to the state-wide support of 52 percent, according to the poll, conducted in both English and Spanish.

The poll is more evidence that the Democrats’ pro-corporate amnesty-and-migration politics are pushing blue-collar and white-collar Latinos to support the populist GOP.

Multiple political analysts are warning Democratic leaders they must push back against their pro-migration progressive base — which includes many woke college graduates — or face a blowout in the 2022 mid-term elections. So far, Democrats leaders are refusing to openly change their pro-migration policy, although Biden’s political staff has forced some extremists out of the administration and is quietly working with Mexico to block some of the South American migrants.

“What you see is a big, big [Latino] shift towards the Republican Party,” outside California, said Mike Madrid, a California-based GOP strategist prominent in the NeverTrump movement. The shift, Madrid said in a recent podcast, is fueled by the Democrats” collective hostility to middle-class industries and jobs, he suggested:

There’s plenty of data to suggest that the real problem here is a policy problem: The Democrats are increasingly a party that is having trouble with working-class Americans because of a lot of the issues that they champion. They are viewed as the enemy of a lot of industries that provide for an $80,000 to $100,000-a-year job working in energy, working in the construction trades, working in all of these industries … It’s really that simple: “It’s the economy, stupid,” right?

However, the GOP’s establishment wing is resisting policy concessions towards the Latino votes, many of who are backing policies that will raise their wages. For example, the donor-funded GOP leaders are refusing to tout the huge pocketbook damage done to Americans by the bipartisan establishment’s economic policy of extraction migration. Since 1990, that policy has pulled millions of migrants from poor countries to serve Wall Street — and its progressive allies — as extra consumers, renters, and workers.

The pro-Democratic Dallas Morning News tried to shrink Abbott’s support in the poll by spotlighting the costs of his pro-enforcement policies.

For example, Abbott is spending much money building a high fence along stretches of the border. So the pollster asked respondents: “Do you agree or disagree that a wall along the Texas-Mexico border is necessary for a safe border.”

The newspaper’s push-poll also asked respondents to choose two popular options as if the Texas government cannot do both: “As a public policy issue for this year, should it be a higher priority to strengthen the electricity grid or security the Texas-Mexico border.” The result was 41 percent for the border 50 percent for the grid.

The editors headline the article: “Abbott support remains solid on border issues, but costs of the weren’t popular, says a new poll.”

Many newspaper polls try to show strong public support for migration, so they rarely ask respondents to consider the economic costs of migration. For example, the poll could have asked: Should the state government work harder to exclude illegal migrants from the jobs needed by young Americans?

A wide variety of little-publicized polls show deep and broad opposition to labor migration. The opposition is growing, anti-establishment, multiracial, cross-sex, non-racist, class-based, bipartisan, rational, persistent, and recognizes the solidarity that Americans owe to each other.