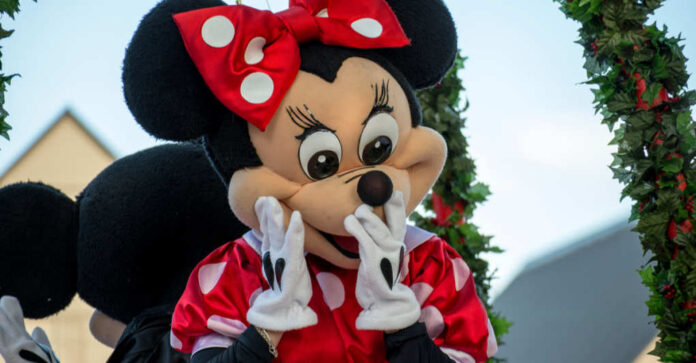 Remember Minnie Mouse with her cute, polka dot skirt and her bright yellow heels? She’s been a Disney icon for years. Every child who has ever visited a Disney theme park can remember when Minnie waved to them – and what she was wearing.

Apparently, Minnie is getting a makeover. No one can leave tradition alone. The Mouse has been wearing the same thing for decades. Somehow, it’s no longer good enough.

There’s only one problem with her makeover. She’s not going more stylish. She’s not being outfitted in skinny jeans or cargo pants. Instead, her new outfit looks more like she got lost inside of Hillary Clinton’s closet.

Disneyland Paris is the first to announce that Minnie will be getting a new outfit. It is being designed by Stella McCartney, a fashion designer. This is all part of a chance to celebrate Disneyland Paris’ anniversary.

The French theme park is honoring Women’s History Month in March, so what better way than to make sure that Minnie Mouse looks like a proper woman?

Now, you might be wondering how many women actually wear pantsuits. It’s certainly a “power” move, but is Minnie the kind of powerhouse you would expect to wear a pantsuit? No. She giggles and walks around carrying flowers, and she pines after Mickey in the cutest way. But to suddenly make her into a businesswoman, especially one who looks like Hillary Clinton, is a bit absurd.

Gorgeous is certainly one word for it. It’s a dark blue suit with black polka dots. So, they let Minnie keep her polka dots, but she’s in darker colors than what she’s ever been before. And, they took away her yellow heels in favor of black flats.

It seems that Minnie Mouse is going to have an identity crisis by the time Stella McCartney is done dressing her.

Oh, but there’s a reason for it all. She’s a “symbol of progress for a new generation.” Ahh, there it is. We knew that there had to have been a more symbolic meaning to the outfit change. Perhaps the next thing we should expect is that Minnie decides that she doesn’t want to make eyes at Mickey. Perhaps another girl mouse will come along in Disney that Minnie decides she needs to start pining for.

McCartney’s iconic costume is a blue tuxedo using “responsibly sourced fabrics.” It’s clear that she used that as an inspiration for the famous Mouse’s new outfit.

As for what people can look forward to if they plan on visiting the Paris theme park, there will be Minnie Mouse t-shirts, also designed by McCartney, that help to honor International Women’s Rights Day.

McCartney said of her relationship with Minnie, “What I love about Minnie is the fact that she embodies happiness, self-expression, authenticity, and that she inspires people of all ages around the world. Plus, she has such great style!”

Well, she did until she suddenly got dressed to mirror Hillary Clinton. It’s only a matter of time before Orlando and California’s theme parks decide to jump on the bandwagon. Perhaps they can even get Clinton to share with the mouse. Then, we can abandon all sense of tradition entirely.