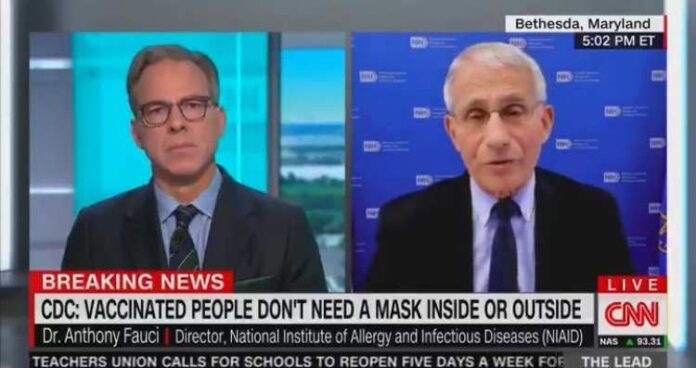 Dr. Fauci is like so many people in the Democrat orbit right now. It is easy to see that he is enjoying the 15 minutes of fame that he’s gotten by being an insane dictator. Even as he admits that we are at least in the “6th inning” of the pandemic, he still wants to lord over everyone.

It’s like he gets off on making rules that he knows he himself will never, ever have to follow. He can barely hide his contempt for his fellow man. Now that his 15 minutes of fame are coming to a close, he has decided to direct his ire at another group that did nothing wrong to him. In his mind, it is the children who are wrong.

The CDC made a big announcement recently, letting Americans know that it was safe to return to normal activities if they had their vaccinations. Since children who are under the age of 12 have not been cleared to take the vaccine as of yet, Dr. Fauci is claiming that they need to keep wearing their masks.

In a desperate bid to keep the attention on himself, the good doctor sprinted to CNN to keep the narrative alive. Once everyone is fully vaccinated and all of the people who want a shot have gotten one, we are not sure what else he is going to have to say. No one should still be listening to this guy.

What he is saying now is tantamount to child abuse. He is encouraging parents to force their kids to wear masks and it’s ridiculous. All that he is doing is creating an environment where people are going to be more and more reticent to look out for each other.

When you stop to think about it, it’s very funny. It’s one of those things that should not be funny but it is. Biden put too much power in this man’s hands. It’s interesting how he was not as worried about severing all Trump era ties when he got into office as he claimed he was.

If he really wanted to clear out everything and everyone that was associated with Trump, this was his chance to do so. However, Trump did not like Dr. Fauci that much and so he got to stay. Trump should have pulled a little reverse psychology on the matter. If he had pretended to patch it up with the doctor, Biden may have let him go.

For the good of society, it is time for Dr. Fauci to stop talking. At this point, there is not much that he can say that would actually be helpful. He’s only here to massage his own ego now. Biden should be able to see through that but we are talking about one of the most gullible presidents of modern times.

He can be led in any direction that you need him to, as long as you let him get a good nap first. Dr. Fauci needs to be put out to pasture once and for all but we are not about to hold our breath and wait for that to happen. In the meantime, we get to wait for him to be checked by more Republican decision makers.

We have all seen the video of him getting into it with Rand Paul the other day. Dr. Fauci was not ready for direct questions about his funding of Wuhan labs. This seems like a topic that is worthy of a much larger discussion but the doctor does not agree!

He wants to be able to control the conversation and when he cannot? He gets very aggressive. Rand Paul can tell us this because he dealt with it firsthand. As for the rest of us, we are anxiously awaiting the day that we do not have to hear another word from this insane quack. Please leave us alone and find some liberals to harass please.