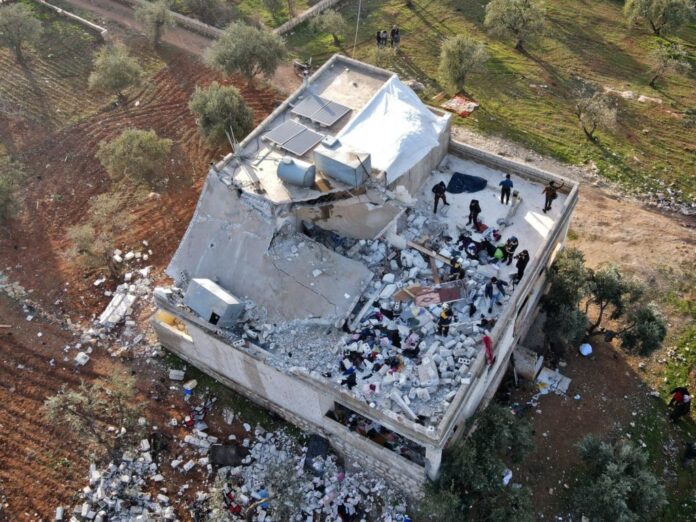 Four children, two women and seven men were reportedly killed during the two-hour attack which reportedly left behind blood-stained walls and “scattered” body parts – the Pentagon has declined to comment on which individual they were specifically targeting.

This has left the media speculating as to whether the attack was aimed at Al-Queda or at the Islamic State, AP reports.

Civilian eyewitnesses described helicopters arriving in the region around 1:10 am, and for forty-five minutes a translator advised any women to surrender or leave the area. Reportedly the U.S. troops were met with silence before a firefight between rebels and U.S. forces begun upon their landing and dismounting from the aircraft – it is unclear who fired first.

U.S. troops were also forced to blow up one of their own helicopters in a controlled explosion during the operation after it experienced a mechanical failure.

This would have been to prevent the embarrassment of it falling into terrorist hands, as happened when U.S. forces left up to 167 aircraft, including 33 Black Hawk helicopters for the Taliban to commandeer after President Joe Biden’s disastrous withdrawal in August 2021.

A picture shows on February 3, 2022 the scene following an overnight raid by US special operations forces against suspected jihadists in Syria’s northwestern province of Idlib which left at least nine people dead, including three civilians. (MOHAMMED AL-RIFAI/AFP via Getty Images)

A picture shows on February 3, 2022 the scene following an overnight raid by US special operations forces against suspected jihadists in Atme, in Syria’s northwestern province of Idlib. (MOHAMMED AL-RIFAI/AFP via Getty Images)

Another scene following an overnight raid by US special operations forces against suspected jihadists in Atme, in Syria’s northwestern province of Idlib. (MUHAMMAD HAJ KADOUR/AFP via Getty Images)

The press secretary for the Department of Defense, John Kirby, in a statement said the mission was “successful” and that there were “no U.S. casualties”. Kirby declined at this stage to give any further information, and did not confirm the body count.

The Syrian Observatory for Human Rights suggested the target would have had to have been of significance as otherwise the U.S. would not have landed the helicopters and soldiers would not have disembarked.

The raid is the largest U.S. raid of this type since 2019 when President Donald Trump authorised the targeting and killing of Islamic State leader Abu Bakr al-Baghdadi. Trump at the time described al-Baghdadi’s death as: “He died like a dog, he died like a coward”.

The American strike team targeted the Idlib area of Syria, a region of over three million, which is the last Syrian region to stand against the Assad government. The area is reported to be infested with jihadists from a multitude of groups, and the U.S. have carried out multiple operations against “high-value” Islamist targets over the last few months.

The attack on Thursday comes just less than a week after fighters from the Islamic State attempted to break out 3,500 prisoners from the Ghwayran prison in the northeastern Syrian city of Hasakeh.

It is estimated some 374 IS militants, and 120 Syrian soldiers and prison workers died during the ten-day siege, where IS was initially able to seize control of the prison. It has since been recaptured by the Syrian authorities.