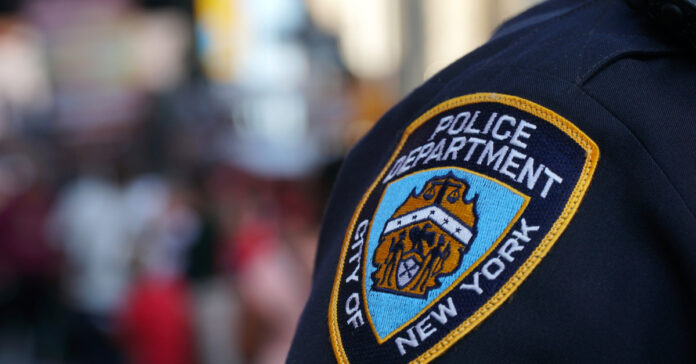 A Brooklyn high school math teacher crossed a line and became a catalyst for intense anger this past weekend. He posted an Instagram story that showed an overhead picture of thousands of NYPD police outside of St. Patrick’s Cathedral on Friday. They were gathered for the funeral of Det. Jason Rivera, a 22-year-old officer. The picture from the teacher had this caption: “5/30/20: NYPD SUV drives into a crowd of protestors. Ideal conditions for reciprocity.”

The Brooklyn teacher, Christopher Flanigan, is employed at Coney Island Prep. He was apparently referring to an incident in May of 2020 where an NYPD vehicle moved through a crowd of protesters following the death of George Floyd. There were no injuries reported from that incident. And New York Mayor Bill de Blasio blamed protestors for not clearing out of the way of the police. Typically, the mayor stays far left in his messaging.

The New York Post reached out to Christopher Flanigan, but he quickly hung up the phone before he could be asked about what was in his private Instagram account. The teacher was profiled by NY1 for his musical tributes to first responders in the very first days of the COVID-19 pandemic. The Post reported that Flanigan’s post was shared with police officers by a concerned follower of the teacher.

Jason Rivera, the slain police officer, was shot and killed on January 21st in Harlem. The incident began when police were responding to a domestic call at 6:15 pm in Harlem. A woman called 911and reported that she was having a dispute with one of her sons inside of her apartment, according to NYPD Chief of Detectives James Essig.

Commissioner Keechant Sewell eulogized Rivera along with fellow officer Wilbert Mora who was also ambushed in Harlem. She said, “This has always been a city of lights, and police officer Jason Rivera was one of the brightest. Jason rose to every challenge that crossed his path. The horror that took their lives is an affront to every decent, caring human being in this city and beyond. Their assassinations, the dousing of Jason’s thousand-watt smile that lifted the spirits of those fortunate to know him shocks sensibilities and leads others to despair.”

One of the officers that saw Flanigan’s Instagram post said that a teacher condoning an act of terrorism is reprehensible. The officer said that he would not want that teacher giving his children instruction of any kind.

Another Brooklyn cop had the same sentiment saying that we have a city worker wishing physical harm or worse to a fellow city worker during a solemn service. He said it was the ultimate act of cowardice.

Anger was prevalent on social media according to The Daily Mail. One person posted that with a Coney Island Prep math teacher encouraging violence against NY cops, parents should watch who is influencing their kids. Another asked if the announcement about the termination of Christopher Flanigan’s contract was forthcoming. They asked if leadership wanted to destroy the school financially because it was either the school or Flanigan at this point, one of them was going down. And another asked if Coney Island Prep had fired the “scumbag” yet.

No doubt, this teacher should have known better. It was the wrong message at a really wrong time.