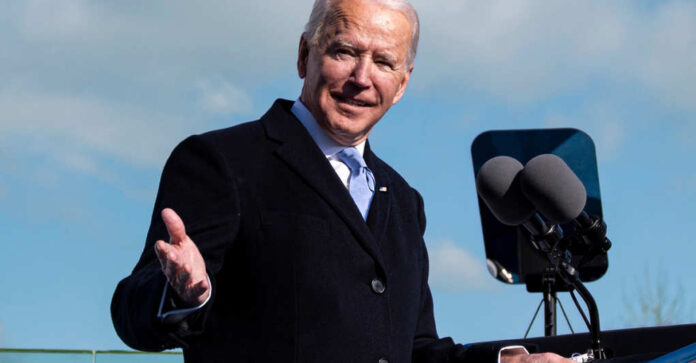 President Biden has made countless mistakes – and he’s only been in the White House for a little over a year. We already know that his approval rating is lower than any other modern-day president.

If the Cabinet isn’t going to use the 25th amendment to get him out, and he’s not going to step down willingly, the only other option is to impeach him.

Whoa, the Democrats have the majority in both the House and the Senate. They’re likely not going to impeach the president they worked so hard to get into office.

But, what about the will of the people?

Each and every person in Congress was voted in to be a voice for the people in their districts. So, if more and more people are actively seeking to have Biden impeached, doesn’t Congress have an obligation to listen?

The polls show that most Americans don’t approve of the job that Biden is doing in office. However, some of the latest polls have also shown that 50 percent of voters also agree with wanting to see Biden impeached. And, this includes 50 percent of Black voters feeling this way – the very same people who are, in part, responsible for helping to get him into office.

According to Rasmussen Reports, “Half of voters believe President Joe Biden should be impeached, and nearly as many think Republicans will do it if they win a congressional majority in the midterm elections.”

So, there’s definitely the possibility of seeing Biden impeached for his lack of effective leadership. However, it is unlikely to happen if and when the Republicans gain the majority following the 2022 midterms.

Kevin McCarthy, the House Minority Leader, is the one who is assumed to become the Speaker of the House if the GOP gain the majority. It would kick Nancy Pelosi to the side, making it possible to discuss the possibility of impeachment.

Fair is fair when you think about it. When the Dems held a majority when Trump was in office, they tried to impeach. The only difference is that Biden could actually get kicked out of the office because he’s breaking laws and has yet to prove that he knows what he’s doing.

McCarthy has been waiting to talk about the I-word within the House. It all started when Biden poorly pulled our troops out of Afghanistan and a terrorist bombing killed 12 service members. And as Representative Elise Stefanik, the no. 3 House Republican said, “This horrific national security and humanitarian disaster is solely the result of Joe Biden’s weak and incompetent leadership.”

Things have only gotten worse for Biden since Afghanistan.

It’s as if Republicans could just stick their hands into a hat and pull out any number of reasons to impeach. Immigration. Inflation. COVID mandates. Mentally unfit. There are just so many choices – and the American public know it.

The Democrats know it, too. It’s why they’re in such a panic over the midterms. They’re trying their darndest to smear the names of every Republican who has a chance of stealing a seat. They’ve tried to change the voting rules. They’ve tried to destroy reputations. Their time has come – and it’s going to be a red wave that cannot be stopped.

Impeachment is certainly a possibility – and even those who voted for Biden are looking forward to what could happen once the midterms are over.

Biden has yet to prove that he can lead the country out of any issue. Once the Republicans come for Biden, it’s only a matter of time before they come for his number two. Kamala Harris is even further down in the polls than he is.