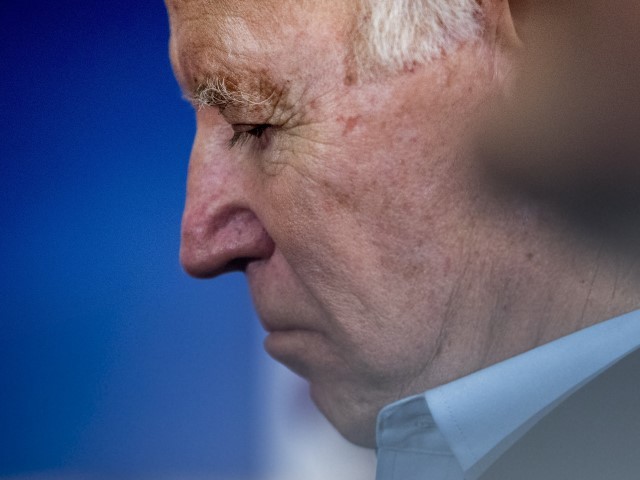 “The index includes questions on presidential job approval, favorability measures of the president’s handling of domestic and foreign policy issues, and whether the president is providing strong or weak leadership,” noted IBD.

In January, the same IBD/TIPP poll gave the president a 44 percent job approval rating among adults versus a 45 percent disapproval. The steady drop can largely be attributed to a sudden cratering in support among Democrats – 66 percent to 21 percent. For Independents, the president fared even worse with a 55 percent disapproval rating. IBD noted:

As the president’s disapproval rating continues to decline, vulnerable Democrats have now begun to distance themselves from Biden as the mid-term elections approach. This November, at least two Senate Democrats stand to lose their seats in swing states that Biden won by slim margins: Sen. Raphael Warnock of Georgia and Sen. Mark Kelly of Arizona — neither of whom have called for the president’s aid.

According to the Washington Post, when Mark Kelly was asked if he wanted Biden to campaign on his behalf, he dodged the question.

“I’m focused on, right now, on things Arizonans care about, like the price of gasoline and groceries,” said Mark Kelly.

Kelly noted that Biden has not been effective on the issue of the southern border.

“What’s going on on our southern border, at least in Arizona — no, it’s not been effective,” said Kelly.

Raphael Warnock was equally evasive when asked if he wanted the president to campaign for him.

“I know that the pundits are focused on the campaign. I really am focused on serving the people of Georgia,” Warnock told the Post.