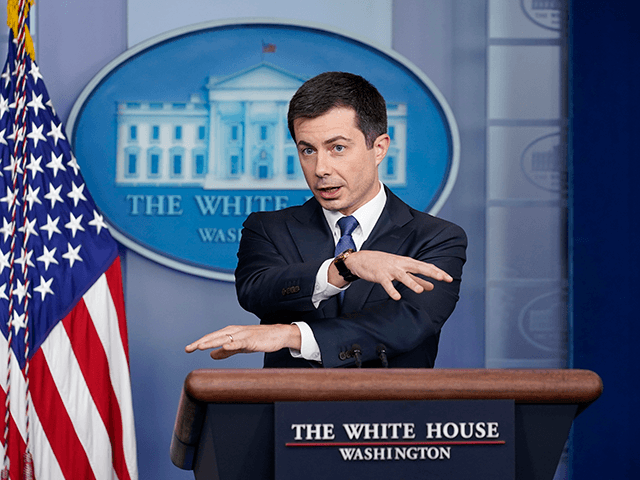 As Breitbart News reported Wednesday, protesters supporting the Canadian trucking convoy in Ottawa closed down traffic on the bridge that connects Detroit, Michigan, to Windsor, Canada, and which carries 25% of U.S.-Canada trade. Traffic opened from Canada to the U.S., but traffic from the U.S. to Canada remained closed. Truckers had already blockaded the road linking the western province of Alberta with Montana, and reports are emerging of other potential blockades as well.

Moreover, Reuters reported Wednesday that Ford and Toyota were both halting some production, partly due to the blockades.

But Secretary Buttigieg has said nothing, nor has the Department of Transportation issued statements about the blockades.

Instead, Buttigieg has been blasting Florida for a bill — one not yet passed, or signed into law — that would prohibit sexuality from being taught to children in “primary” grades. The Biden administration calls it the “Don’t Say Gay” bill, erroneously.

Buttigieg’s sole recent comment on trucking on social media was to comment on the Biden administration’s purported effort to hire more veterans as truckers.

Buttigieg served in the U.S. Navy Reserve as an intelligence officer and did a tour of duty in Afghanistan.

The Secretary has been vocal about identity politics and Democrats’ other ideological priorities, such as electric vehicles, but took two months off for unannounced paternity leave during the height of the cargo crisis last summer, and was silent as the country discovered mass looting of cargo trains in Los Angeles, which disrupted deliveries of goods throughout the country.