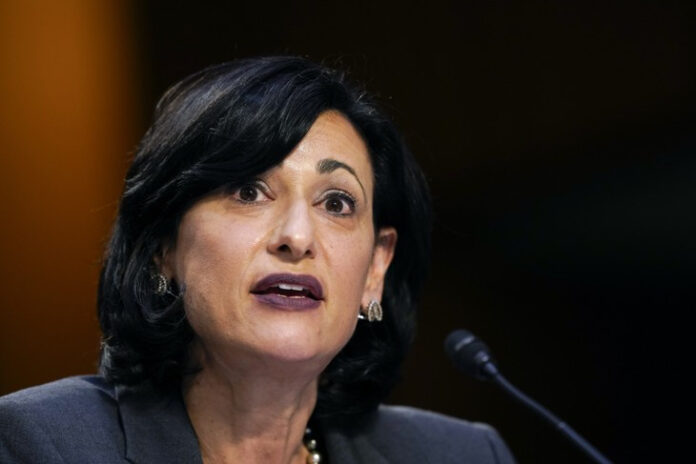 The Democrats are seething with lust as the CDC Director Rochelle Walensky has been promoting the idea of forced vaccination through peer pressure. The CDC has stated that people no longer need to wear a mask if they have been vaccinated. The intrusion into personal health is a clear violation of HIPPA laws and the latest attempt by liberals to take more control of people.

The thought that only the people that have taken the shot can remove their masks is devilish to the core. The CDC is in league with the Democrats, and their pandemic fear pushing tactics. Joe Biden wants people to take the shot so he can take credit for everyone getting vaccinated. And there is no better way to entice people by letting them take off their facial diapers.

But Walensky’s statements regarding mask-wearing were not the shocking part. She revealed a subtle lie that skeptics had long thought regarding the number of people who died from the virus versus those who died of other causes. The incredible part is that most other causes of death have all but disappeared as if by a miracle.

Some of the deaths from COVID were people that died after they received their vaccination. Walensky stated that “Not all of those 223 caseThe virus s who had Covid actually died of Covid. They may have had mild disease but died, for example, of a heart attack.”

The virus may not be the killing machine that people think that it is. But it is enough to cause the body to be overwhelmed with too many repairs, so it just gives up, and the person passes away.

CDC Director Rochelle Walensky, somewhat confusingly, says they are aware of 223 people who have died with covid after being vaccinated.

“Not all of those 223 cases who had covid actually died of covid. They may have had mild disease but died, for example, of a heart attack.” pic.twitter.com/KmjbrXnd1k

The lie that the Democrats and their liberal scientists have been pushing is that every death over the past year has been from COVID. But now that Walensky has stated the truth, there is no rational person who will be willing to listen to the CDC or want to follow their guidelines.

People deserve to know the truth about what is happening around them. The vast majority of people who died from COVID had died with the virus in their bodies. But when a hospital gets more money from a COVID death than a flu death, they will report it as a viral death for the extra dollars that they will end up getting.

Walensky also was interviewed by Martha Raddatz with ABC, and she stated that “It was just Tuesday when you sat before a Senate committee, and you were adamant then that masking and social distancing should remain in place. But The Washington Post is reporting you had already approved the decision to change the guidance. When it was finally announced on Thursday, it came as a huge surprise, and left some administration officials, doctors, businesses, off-guard. So, why so suddenly, and why did you not tell the Senate panel what you had decided?”

CDC Dir. Rochelle Walensky defends new mask guidance for vaccinated Americans, telling @MarthaRaddatz: “We now have science that has really just evolved even in the last two weeks that demonstrates that these vaccines are safe, they are effective.” https://t.co/gpjJwNg0q7 pic.twitter.com/0t0SX6OmXN

One of the issues with her announcement is that there is no communication being given to governors. Some of them had found out about the changes from the local news long before Biden ever gave them an update.

Walensky was not about to answer the questions from her satanic reporter truthfully. All she could mumble were cold words of wanting to celebrate the moment that people were now dying of other causes, and they would no longer need to wear the facial mask.

So until 2 weeks ago these vaccines weren’t safe and effective? #science https://t.co/wXLzDnuZ0B

Walensky went on to confuse people by saying that “Cases have been coming down more than a third just in the last two weeks. We have vaccine now across this country widely available for anyone who wants it. And we now have science that has really just evolved even in the last two weeks that demonstrates that these vaccines are safe, they are effective, they are working in the population, just as they did in the clinical trials, that they are working against our variants that we have here circulating in the United States, and that, if you were to develop an infection, while — even if you got vaccinated, that you can’t transmit that infection to other people. Some of that science was really evolving as late as last Thursday.” But in the end, Biden will continue to spout a different story.