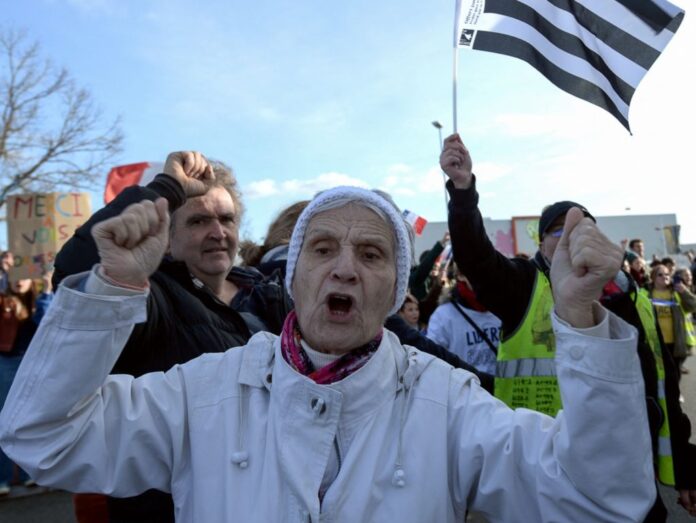 Some 1,300 vehicles are on the move into capital of the European Union Brussels Monday morning — despite a ban on such protests by city police — with 30 intercepted by officers so far. Brussels Police have warned motorists to avoid trying to drive into the city.

Authorities in charge of other European cities, such as Paris and Vienna, have made similar attempts to ban demos styled on anti-mandatory vaccine protests in Canada, though all so far have been futile.

According to a report by the Brussels Times, demonstrators planning on taking part in the convoy — which was banned by authorities last Thursday — had said that they were set on continuing with their plans, regardless of what local authorities say.

“They can’t stop us,” one activist is reported as saying online. “Go on and fight for your freedom. Screw this shitty government, [whether this protest is] banned or not.”

“As if we were going to cancel everything now because we didn’t get permission,” wrote another. “If everyone just drives up to the Ring and pulls the key out of the ignition there, it’s over.”

Fresh reports Monday morning from the same outlet reports there are now 1,300 known vehicles on their way to Brussels to take part in the protest, with police patrols “stationed at key entries to the city”. French broadcaster TFI Info reports that 30 vehicles were intercepted and blocked by Police on the roads into Brussels this morning.

Meanwhile, banned demonstrations in Paris and Vienna have already gone ahead, with both seeing thousands of people take to the streets to protest COVID lockdown measures.

In France, nearly 100 people were arrested while hundreds more were fined during the blacklisted demonstration, which saw armoured police vehicles used, and tear-gas deployed to clear demonstrators.

Meanwhile, thousands of people partook in anti-vaccine mandate protests in Vienna, with an illegal Convoy travelling through the city centre.

According to journalist Markus Sulzbacher, the convoy protests are set to become a regular feature of anti-lockdown demonstrations in the Austrian capital.

While authorities in Belgium have issued a ban on the forthcoming anti-lockdown protest in the nation’s capital, the nation has also seemingly acquiesced to calls for the country to loosen its lockdown restrictions.

From February 18, rules regarding the closure of establishments after a certain time, as well as the mandatory wearing of masks are set to be loosened.

Nightclubs will also be allowed to reopen in the country under the newly published plans.

“Today, we are taking a huge step forward. We are returning to normalcy,” Politico reports Alexander De Croo, Belgium’s Prime Minister, as saying.

“There will no longer be a[n enforced] closing time … nor a limit on the number of people seated at the same table. Only staff will have to wear the mask,” the publication also notes the PM as saying.

Of particular interest is the date of the loosening, however, with nightclubs across Belgium having previously threatened the government that they would re-open on that date, regardless of whether the government would allow them to or not.

“…having remained too long without perspective or sufficient financial aid, the Flemish, Walloon and Brussels clubs are taking the joint initiative to reopen in the form of a festive event,” read one press release regarding the announced plan to re-open regardless of the government position.