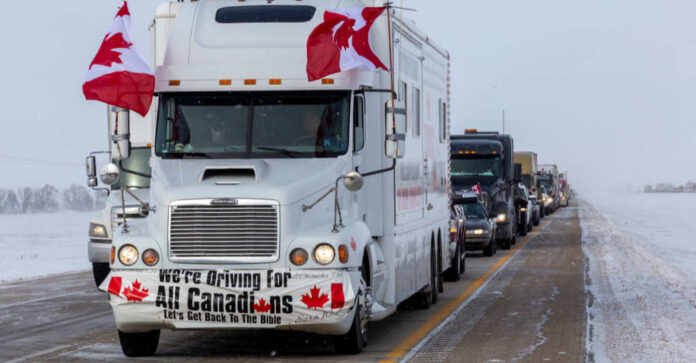 Charitable donations and standing up for the rights of others go hand in hand. For decades various governments across the globe have been able to raise funds for various causes. From telethons for orphanages in Calcutta to funding for public art exhibitions in NYC to BLM protests across the globe, governments have largely stayed out of it. Now in Canada, they want to change that.

GiveSendGo is a Christian-based fundraising platform, and their action to receive donations for the Freedom Convoy did not go unnoticed by the Canadian government. Thursday evening an Ontario court decided to get involved and froze all the donations the group received. This government order is up for serious debate. Not only because of their rationale behind the order, but also the legality of it.

After the ruling on Thursday night, GiveSendGo tweeted “Know this! Canada has absolutely ZERO jurisdiction over how we manage our funds here at GiveSendGo. All funds for EVERY campaign on GiveSendGo flow directly to the recipients of those campaigns, not least of which is The Freedom Convoy campaign.” While a reassuring message for anyone who donated to the cause, being based in Boston, Massachusetts might not provide them the security they are hoping for. Especially after being exposed last week for a massive security lapse that left donor information exposed.

The crowdfunding site became the place to donate in the wake of GoFundMe’s decision to suspend donations in the wake of reports of violence and extremism at the protests- reports that are largely unfounded. GoFundMe in turn had originally planned to disperse funds as they saw fit, but after immense backlash decided to refund all donations.

Deciding to shut down the Freedom Convoy funding campaign set precedence not before seen with crowdfunding. As the site has previously allowed for fundraising for severe criminal defenses, BLM protests and riots, and other highly debated causes, their decision to act out against the Freedom Convoy came as a shock to many who donated. This is the type of protest the people have been hoping for in the wake of outrageous laws and regulations created by the Canadian government.

As the protest has gone on both Ford and Toyota have been forced to shut down production due to the stoppage of the flow of parts. With the borders effectively shut down as a part of the protest, and many passageways to factories also clogged up, it is having a ripple effect across the economy.

You would think PM Trudeau would see the infrastructure issues here in America and want to prevent that for his own country. While the quest to keep his people safe and healthy is certainly noble, it should not come despite evidence showing it doesn’t work, and it most certainly should not aim at the people who provide the very logistics support that allows your country to function.

Attorney for the Freedom Convoy Keith Wilson was quoted in The Post Millennial as saying “With respect to bitcoin, what we’ve witnessed… what the world has witnessed is the power of government to manipulate the flows of peoples hard-earned dollars, to advance a government’s objectives and to seek to defeat the will of individuals in their democratic process. I have been following bitcoin very closely, it’s a decentralized platform for people to exchange their hard-earned value with someone else for theirs. It bypasses the constraints and arbitrary controls of government. This is the perfect example of why fiat currency is in trouble.” His statement is a perfect example of why so many are flocking to cryptocurrency for donations and other transactions that the government may disagree with, or that they simply want anonymity for.