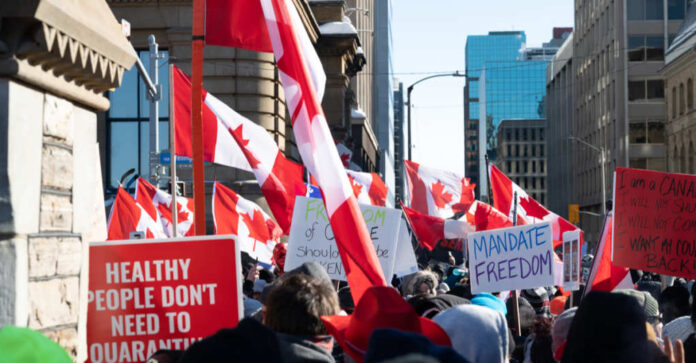 Justin Trudeau is the Prime Minister of Canada that has earned the reputation of being anti-freedom. His strict lockdown measures and ineffective mask mandates have nothing to stop people from being infected with the COVID-19 virus. The bug has joined the ranks of the common cold, and people have come to believe that the liberals are the only forces that keep driving the pandemic.

The insanity of the Prime Minister has reached epic proportions and now rivals that of Joe Biden. His primary mission to keep people locked down is to fight the Freedom Convoy that has taken to the streets to protest the insanity Trudeau is living through.

The Freedom Convoy is made up of patriotic truckers blocking the roadways that lead into Canada. They are refusing to move their trucks until the Prime Minister removes the mandates and regulations related to COVID-19. But according to Trudeau, he will fight the truckers and retake the streets of Canada.

The blockade of the major roadways has caught national attention. Millions of dollars have been donated to the convoy because people worldwide are all sick and tired of the liberals trying to usher in their version of a corrupted world where the liberals reign supreme and all others must bow before their feet.

The Daily Wire got a report from Trudeau’s office that stated, “Prime Minister Justin Trudeau convened the Incident Response Group on the ongoing illegal blockades taking place across the country that are threatening trade, jobs, the economy, and our communities. He was joined by ministers and senior officials who are actively engaged and working closely with provincial and municipal governments, and who are assessing the requirements and deploying all federal resources necessary to help them get the situation under control.”

The nasty leaders try to sound intelligent by stating broad words that mean nothing. The Prime Minister has already indicated that his approach will target what he considers to be an occupation. He sees the protest as an invasion force trying to take control of Canada. The slick-headed man has told the world that he will treat the protestors as enemies and will do whatever it takes to end the protest.

Trudeau’s office believes that people’s lives are being interrupted and harmed because truckers have parked a few vehicles on the road. But the truth of the matter is that the Canadians want the COVID-19 restrictions to end and for their leaders to let them return to living as they please.

The Prime Minister’s office stated, “The group committed to continue providing federal resources to support enforcement efforts in Ottawa, where the occupation has significantly disrupted local residents’ lives, impacting businesses and families with harassment, threats of violence, and vandalism. They reiterated that the federal government has and will continue to respond to all requests for appropriate support and resources.”

But the part of violence has not happened. These truckers have peacefully protested. And the only threats of violence being issued are coming from Trudeau’s mouth. He does not like being foolish because people are protesting successfully and making a difference.

The liberal media fails to mention that Trudeau is fighting his political party that wants to see the COVID-19 restrictions eased back. Easing the restrictions they maintain will help Canada get back to normal.

But for some reason, the nasty liberals trying to take over the world are relentless when it comes to giving up any power they have grown accustomed to during the pandemic. The ones refusing to listen to their supporters find out that everyday life outside of politics is their new way of life.

The COVID-19 measures have already divided the country. It has caused unmeasurable harm to millions of people around the world. But people like the Democrats in America and Trudeau in Canada cannot seem to let life get back to normal because they live in a state of fear that they have created for themselves. And somewhere in their sadistic little world, they believe that they are the answer to the problem.