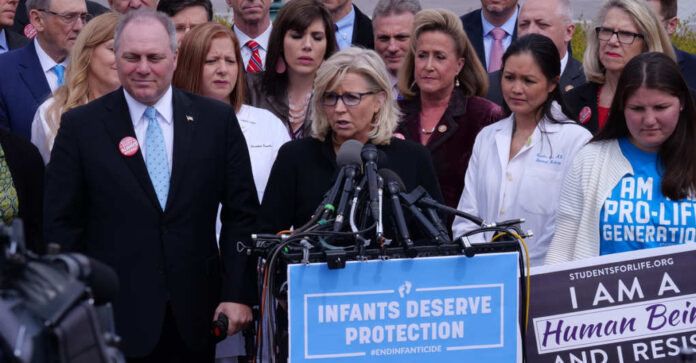 As you likely know, Wyoming Republican House Representative Liz Cheney isn’t exactly on the best of terms with her party and hasn’t been for a while. You’d think that would mean she’d be cozying up to party leaders and her constituents alike, hoping that they’ll show some grace and let her keep her seat come November of this year.

And yet, it seems she’s been doing the exact opposite.

Not only is she not spending any time with them, but she’s also taken to choosing liberal media over them.

As The New York Times recently reported, it’s been a whole two years since Cheney has appeared at a single state party function. And it’s been nearly as long since she’s been seen at a chapter-level event. In fact, she’s only had one in-person event with the people of Wyoming since Veterans Day and Saturday.

But now, she’s even avoiding those who put her in office in the first place.

On Saturday night, the Wyoming Republican Party held a black-tie fundraiser event in Rock Springs, something most in both her party and caucus would have blocked out on their calendar for months. and yet, Cheney was not in attendance.

Instead, she was some 200 miles away at the Wyoming Press Association’s annual convention in Casper.

That’s right; she was wining and dining with members of the media rather than the voters whose voice she is supposed to be.

According to what Cheney told the Times, she doesn’t have time for the “crazies” who put her in office. Of course, this is exactly the reason that she’s on the outs with her party, to begin with.

Cheney was one of a few Republicans who joined with those on the liberal left to impeach former President Donald Trump during House Speaker Nancy Pelosi’s second attempt to oust him. As a result, Pelosi rewarded her and fellow turncoat RINO Adam Kinzinger of Illinois to be part of her kangaroo circus committee to “investigate” the January 6 Capitol incursion.

Now, both Cheney and Kinzinger’s vote against Trump would be understandable if their states had made it known that they were against Trump. But as it turns out, they didn’t. In fact, Cheney’s constituents gave Trump his highest percentage of the vote in the country in 2020, coming in at just under 70 percent, according to the Times.

Still, Cheney voted against him.

This made it pretty clear, if it wasn’t already, that Cheney had no interest in actually doing her job, namely speaking for the people of Wyoming. Instead, she seems to only be after the power and prestige that her seat could bring, much as her father did as Vice President under George W. Bush.

And her party has noticed.

In January, the Republican State Central Committee held a straw poll vote between Cheney and her primary challenger and Trump-endorsee Harriet Hageman. Hageman won in a landslide with a vote of 59-6.

And on Friday, as Cheney has since refused to attend several other party events and opportunities to meet with her constituents, the Republican National Committee officially voted to censure both her and Kinzinger.

All of that, of course, comes after the fact that the Wyoming Republican Party’s Central Committee already voted to not even recognize Cheney as one of their own back in November, officially giving her the title of RINO (Republican in name only).

Naturally, the Times did well to paint her as more of a martyr than one who had traded sides and ignored the wishes and needs of those entrusted to her. According to their article, she has been “forced… into a kind of exile from Wyoming Republican Party apparatus,” and all because she voted to impeach Trump and not side with the literal millions who question both the integrity of our elections, as well as what the left say happened on January 6 in Washington D.C.

Undoubtedly, her party doesn’t see her as quite the victim the Times makes her out to be. And comments like her saying she’s not even going to try to convince those “crazies” of her innocence aren’t going to make them see her side of the story any clearer.

Chances are, she just signed away the death of her career with that last one.