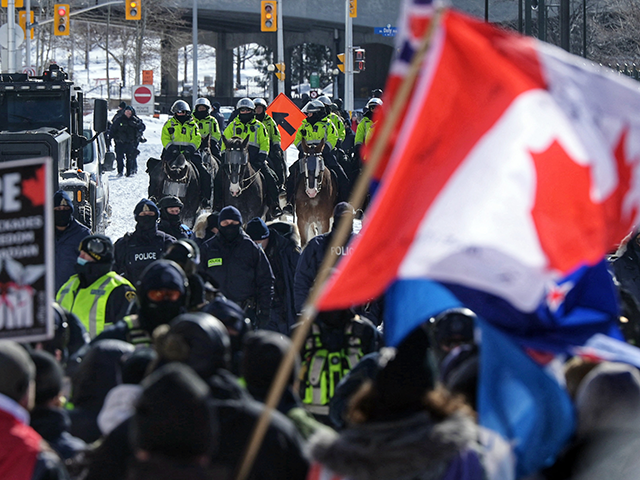 The protesters sang Canada’s national anthem while standing in front of the police. Some shouted, “Hold the line,” “freedom,” and “peace and love.” Many wore and held Canadian flags.

Law enforcement included mounted officers on horses and an armored vehicle. Many police officers were observed wearing ear protection to guard against loud noises on several livestreams from reporters on the ground.

Breitbart News learned that police are denying motorists entry to the downtown core of Ottawa via checkpoints on many roads as of Friday. Police officers manning these checkpoints are stopping all motorists and asking their intentions for travel and if they are residents of the area. All drivers expressing an intent to join the Freedom Convoy demonstration are denied further travel in the direction of the protest.

Police officers at checkpoints advised motorists that traffic may eventually be exclusively restricted to local residents. Motorists may be asked to display drivers’ licenses to prove local residency.

Breitbart News learned that hospitals in Ottawa were advised to prepare for pepper spray casualties.