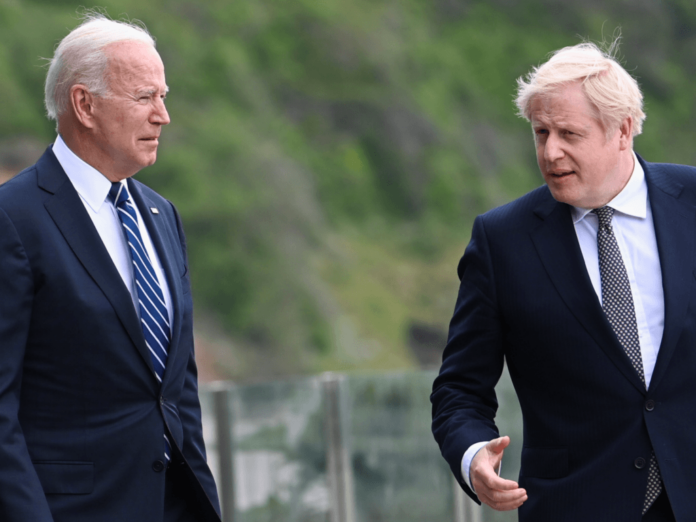 While former president Donald Trump was famously a champion of the pro-sovereignty Brexit movement and wanted to ink a “big” trade deal with Britain, his anti-Brexit successor Joe Biden has reportedly said that a British trade deal is not a priority for his administration.

In light of the 77-year-old Democrat’s intransigence, the British government — having wasted its chance to strike a U.S.-wide deal during the Trump administration by putting off the implementation of the 2016 vote for Brexit until 2021 — will now look to craft bespoke deals with individual states in America.

“From York to New York, Birmingham in the Midlands to Birmingham Alabama — we want to turbo boost UK and U.S. businesses,” a Department for International Trade (DIT) source told The Sun newspaper.

“When you look at the numbers, the wins on offer by bagging trade agreements with individual states are massive.

“California’s economy alone is larger than the economy of the whole of France.”

Currently, trade between Britain and California amounts to approximately $260 (GBP191) billion per year, with Britain being the state’s fifth-largest export market as of 2019.

Confirming the report, a spokesman from the DIT told The Times that the government will look to expand upon “ties at both a federal and state level” with America.

“We want to make it easier and cheaper for UK and U.S. businesses to work together. Whether it is a recognition of professional qualifications, increased uptake of state-level procurement contacts, or closer ties between key sectors – we are exploring ways to help businesses take full advantage of these opportunities, benefitting communities across the UK and the U.S.”

Though tariff policy is set by the President, states are empowered to make deals with foreign nations in non-tariff areas, including the service industry, which is a key British exporter to the United States, comprising around 64 per cent of British exports to America — worth about GBP83.7 billion.

During his first White House meeting with President Biden, Prime Minister Boris Johnson was told that the Democrat administration would not commit to signing a post-Brexit trade deal with Britain before the 2024 election.

Biden reportedly told Johson that he had “a lot of fish to fry” and therefore a trade deal was not a top priority.

The prospect of an American trade deal was a key pillar of the economic plan once Britain gained economic independence from the European Union.

Former President Trump long expressed a desire for a large deal to be signed but, as previously mentioned, this failed to materialise after Tory governments repeatedly delayed the official break with the EU until Trump left office.

In stark contrast to Trump, Biden has consistently opposed Brexit, much like his old boss, former president Barack Obama, who infamously weighed in before the Brexit referendum to warn Britons that they would be put to the “back of the queue” should they vote to Leave the European Union.

Also of concern has been Biden’s apparent anti-British sentiments, seemingly linked to his much-touted Irish ancestry. The Democrat has previously warned that should the United Kingdom’s dispute with the EU over Britain’s rightful sovereignty over Northern Ireland jeopardise the Good Friday peace agreement, then trade with America would suffer.

President Biden did not have such strong words for the EU when it attempted to impose a border between Northern Ireland and the Republic of Ireland in order to halt vaccine shipments to the United Kingdom, however.

Brexit’s Nigel Farage previously said that Biden “is keener on the relationship with Ireland than he is with us, sees Brexit as a mistake and I do not see any prospect of a free trade deal with the USA under President Joe Biden.”