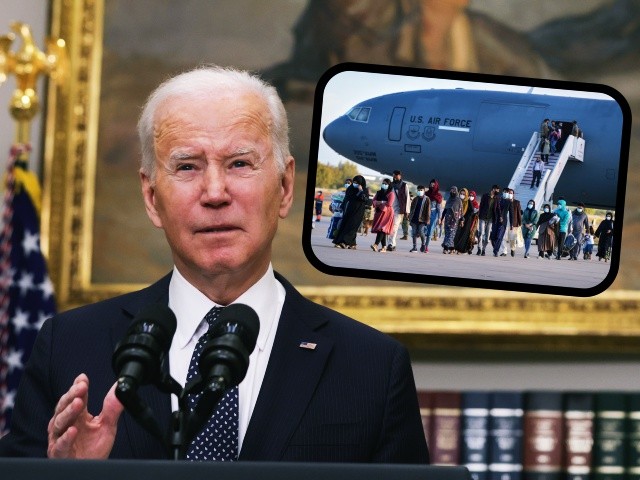 The report, released late last week, exposes massive holes in Biden’s unlimited resettlement of Afghans to American communities — the largest in U.S. history — such as a lack of vetting through the National Counter-Terrorism Center (NCTC) database.

Specifically, the report details how Biden’s “agencies did not use all available data when vetting Afghan evacuees” and therefore, the National Ground Intelligence Center (NGIC) discovered “Afghans with derogatory information … who were believed to be in the U.S.”

Now, those unvetted Afghans with possible terrorism ties have gone missing inside the nation’s interior, the DOD report states:

As of November 2, 2021, NGIC personnel had identified 50 Afghan personnel in the United States with information in DOD records that would indicate potentially significant security concerns. [Emphasis added]

DOD personnel could not locate some Afghan evacuees whom NGIC personnel identified as having derogatory information that would make them ineligible for the parolee program conducted at [U.S.] safe havens. Specifically, NGIC personnel stated that they could not locate some Afghan evacuees when attempting to report derogatory information to the DOD and U.S. Government agencies supporting [U.S.] safe havens. [Emphasis added]

For example, as of September 17, 2021, the NGIC had identified 31 Afghans in [the U.S.] who had derogatory information. Of those 31, only 3 could be located. [Emphasis added]

The report indicates that the unvetted Afghans flagged for security concerns who have gone missing inside the U.S. interior “could pose a security risk to the United States.” Biden’s State Department and the United States Citizenship and Immigration Services (USCIS) also run the risk of providing those Afghans with visas, green cards, and naturalized American citizenship.

To date, Biden has resettled more than 74,400 Afghans in American communities across 46 states since mid-August 2021. The resettlement has continued despite Department of Homeland Security (DHS) Secretary Alejandro Mayorkas’s admission that “not all” Afghans were interviewed in person before getting sent off to American towns and cities.

Refugee contractors, the non-governmental organizations (NGOs) that rely on American taxpayer money to resettle refugees across the U.S. annually, secured billions as a result of the funding measures.

Every five years, refugee resettlement costs taxpayers nearly $9 billion. Over the course of a lifetime, taxpayers pay about $133,000 per refugee, and within five years of resettlement, roughly 16 percent will need taxpayer-funded housing assistance.