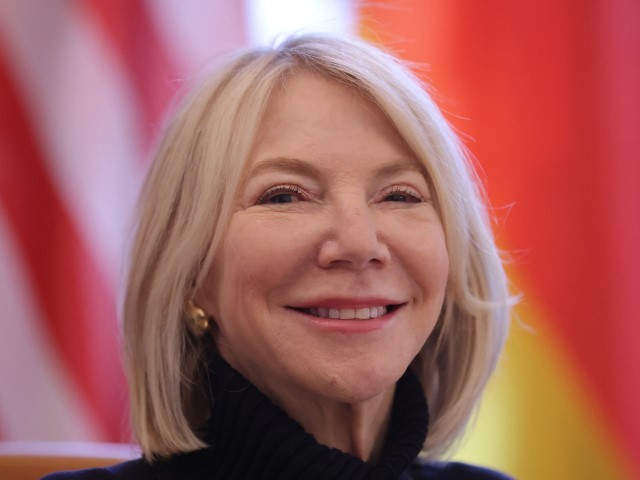 Gutmann, who presented her credentials just days ago — Thursday of last week — to begin work as the U.S. Ambassador to Germany, attended meetings at the Munich Security Conference with world leaders and fellow top U.S. officials, including Harris and Secretary of State Antony Blinken.

Instead of staying in Germany to work at this critical time in foreign policy in Europe, an embassy spokesman confirmed that Gutmann is now back stateside just days after first reporting for duty. Germany is one of the key geographic centerpieces of the unfolding Russia-Ukraine conflict, given Biden’s decision to allow Nordstream 2, the Russian natural gas pipeline into Germany, to proceed after his predecessor former President Donald Trump held up the pipeline during his administration. The Kremlin has been increasingly emboldened since Biden opened up the pipeline and now threats of a potential invasion in Ukraine perhaps represent the possibility of the biggest war in Europe since World War II.

“The White House lobbied the Senate to confirm Gutmann this month because they said she was urgently needed in Germany due to an impending war from Russia,” a former State Department official told Breitbart News.

Gutmann’s nomination had been held up in the Senate for some time after she was nominated, but the Democrat-controlled chamber finally confirmed her earlier this month. That begs the question why there was such a rush to confirm her when she has already left Germany after being there for just a few days after she formally reported for duty.

The U.S. embassy team in Berlin insists that Gutmann is actually working while she is back in the United States, and not taking a vacation. Joseph Giordono-Scholz, the spokesman for the U.S. Embassy in Berlin, told Breitbart News when asked about this that Ambassador Gutmann is engaged in “cross-government consultations” on the Russia-Ukraine crisis and is completing “in-processing” at the State Department–and will return to Berlin soon.

“Every effort was made for Ambassador Gutmann to be sworn in and credentialed as quickly as possible, precisely so that she could start her tenure quickly and join the key engagements with allies and partners at the Munich Security Conference,” Giordono-Scholz said in an email. “Ambassador Gutmann has temporarily returned to the United States to undertake cross-government consultations on the situation and to complete necessary State Department in-processing, and will return to Berlin as soon as possible. Ambassador Gutmann is fully engaged in the critical diplomacy being undertaken at this crucial moment. Any suggestion otherwise is completely false.”

It is unclear if taxpayers paid for Gutmann’s flight home to the United States after Harris and her team denied the ambassador a seat on Air Force Two–and if they did how much it cost. Giordono-Scholz would not answer specifics about the Vice President’s team’s operation, but did not deny that the ambassador sought a seat on her jet back to America, or that the Vice President and her team denied that request.

The White House and the Vice President’s press office did not immediately return a request for comment.