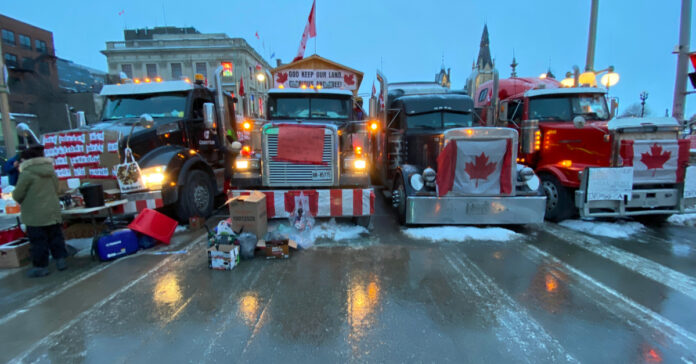 The price of freedom is a steep one when you are in the middle fighting for it. Thankfully this time the price has been significantly lower than other fights across the globe. By and large, both the protestors and the police have been respectful of one another. The counter-protestors on the other hand have been doing everything they can to antagonize and enrage the protestors so they can make a narrative of it. Despite having vehicles beaten on and various levels of threats flung at them.

Despite the protests being proactive and peaceful, Prime Minister Justin Trudeau cannot tolerate any potential challenges of his authority. As such he has been working to shut them down. One of his biggest and first steps was to enact the 1988 Emergencies Act for the first time in the Nation’s history.

By doing this he has given the police the authority to regulate and even prohibit people from unrestricted travel within a specified area or areas. In essence, this put anyone in the protests right in the crosshairs, and anyone who supported them would have aim taken at them as well.

As a first step towards ensuring the PM’s will is being enacted, the Ottawa police arrested Tamara Lich and Chris Barber. Both went peacefully as if they knew the arrests were coming. Given their positions within the protests, it makes sense that they knew it was inevitable. While many of their fellow protestors have been able to stay out of cuffs thus far, a few have not been so lucky.

Given the verbiage of the Emergencies Act, there is little the Ottawa police cannot do to the protestors. The optics of how they choose to proceed is the biggest factor here. Since the Prime Minister refuses to have an actual conversation with them, he has ultimately transferred the answers to how this all ends to the Ottawa police and even to a degree the Ontario Provincial Police as well.

These two organizations have been bringing in reinforcement officers to Parliament by the busload to get fully manned for their eventual movement in on the entrenched protestors. Given their movements to choke off any more people from moving in and telling truckers where to collect their rigs if they are towed it is all but certain they are willing to end it any way possible. Off the streets, the Canadian government has been collecting banking and crypto information on the protestors and their financial backers.

Canada’s deputy PM and minister of finance Chrystia Freeland sent a clear message to the protesters and their supporters on Monday. “As of today, a bank or other financial service provider will be able to immediately freeze or suspend an account without a court order. In doing so, they will be protected against civil liability for actions taken in good faith.”

This move signifies the start of real socialism in this notoriously free and polite country. The idea of having your bank accounts frozen or suspended based upon absolutely nothing with no repercussions for the bank or the person ordering the action is horrific. These steps are akin to the ones taken by Adolf Hitler as the Third Reich rose to power. Given the use of the swastika by the counter-protestors (something the PM conveniently blamed on the original protestors), this step paints a grim picture for the future of the protest or anyone associated with it.

Another big warning issued comes from interim Ottawa Police Chief Steve Bell. “The action is imminent. We absolutely are committed to end this unlawful demonstration…We want this demonstration to end peacefully. If they do not peacefully leave, we have plans.” This statement alone should be a grave warning that the police are ready to go full-on militant to follow PM Trudeau’s words. Imagine if Trump had behaved this way over BLM protests that actually killed people and destroyed entire communities.