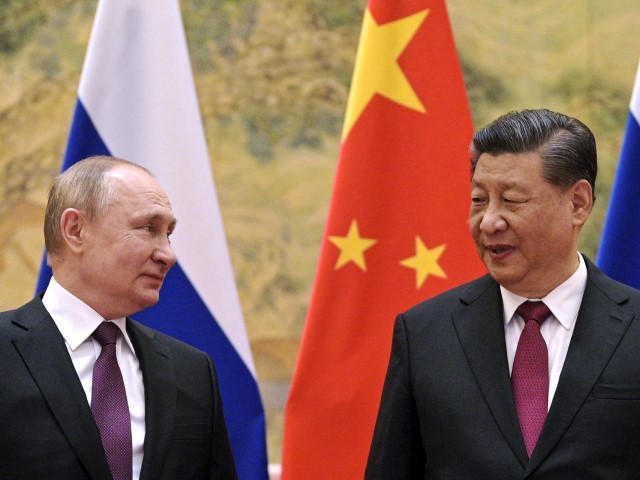 Russian leader Vladimir Putin announced the bombing of multiple major Ukrainian cities, including Kyiv, in the early morning hours of Thursday, an escalation of an invasion of Ukraine that Putin began with the colonization of Crimea and interference in the eastern Donbas region in 2014. Putin threatened any state willing to aid Ukraine with “consequences greater than any of you have faced in history,” a statement observers interpreted as an expression of intent to use nuclear weapons.

Prior to the attacks on Kyiv, Mariupol, Dnipro, and Kharkiv, Putin delivered a long, confusing speech on Monday in which he proclaimed that Ukraine was not a real country, but the Russian proxy fighters in the Donbas territories of Donetsk and Luhansk were.

“Modern Ukraine was completely created by Russia – to be more exact by Bolshevik communist Russia,” Putin falsely claimed. “Ukraine has never had stable traditions of their own statehood. Starting from 1991, they followed the path of the mechanical copying of foreign models that had nothing to do with their history or with the Ukrainian realities.”

China, typically one of Russia’s closest allies, has notably refused to recognize Donetsk and Luhansk, sticking to its policy of refusing to recognize any separatist government anywhere in the world. China considers the sovereign nation of Taiwan a rogue province in China and cautiously avoids offering legitimacy to any other territory that other countries claim for themselves, including separatist movements in places like Somalia, Spain (Catalonia), and Georgia, where Putin similarly declared the territories of South Ossetia and Abkhazia sovereign states in 2008.

In addition to the nation of Taiwan, China is actively combatting forces wishing to divorce from the Beijing-based Communist Party in Tibet, East Turkistan, and Hong Kong.

Chinese Foreign Ministry spokeswoman Hua Chunying refused to take sides between Ukraine and Russia again on Thursday, instead appearing to blame America for the ongoing war.

“She said that China believes there should be mutual cooperation and sustainable security, and reasonable security concerns of all parties concerned should be respected and solved,” according to the Chinese government-run Global Times, “noting that China hopes all parties don’t shut the door on peace, but continue negotiations and try to ease the situation as soon as possible.”

Hua confirmed that China would not support the Russian military in its invasion of Ukraine, but framed it as an attack on the United States.

“Hua also said China will not do what the US has done by providing military facilities to Ukraine, adding that as a powerful country, Russia does not need China or other countries to provide it with weapons,” the Global Times reported.

Hua claimed the Russian invasion of Ukraine was a “fire” that America somehow “started,” without elaborating.

Ukraine is a United States ally, but not a NATO member, and America is not formally treaty-bound to protect it. Under the Budapest Memorandum, signed in 1994, Ukraine agreed to give up its Soviet-era nuclear weapons in exchange for military protection from America and the United Kingdom. Ukrainian President Volodymyr Zelensky proclaimed the Budapest Memorandum a failure last weekend and threatened to pursue nuclear weapons development.

Despite its role in the Budapest Memorandum, America has not played any overt military role in the Ukraine-Russia conflict. Under President Joe Biden, America has largely encouraged Putin to invade by announcing a lack of intention to act in the event of a “minor incursion” and lifting critical sanctions on Russia’s Nord Stream 2 natural gas pipeline project.

The Russian government interpreted Hua’s remarks not as abandoning Russia, but as a vote of confidence in its military.

“Russia is capable of coping with the situation in Ukraine on its own and does not need China’s military support, Chinese Foreign Ministry Spokesperson Hua Chunying announced on Thursday,” the Russian news outlet Tass reported.

During an emergency U.N. Security Council meeting late Wednesday on Russian aggression in Ukraine – presided over by Russia’s ambassador – China again refused to support Russia in recognizing Donetsk and Luhansk. Instead, Ambassador Zhang Jun offered a vague appeal to dialogue and an apparent vote of confidence to Ukraine.

“All parties concerned should exercise restraint and avoid the further escalation of tensions. We believe that the door to a peaceful solution to the Ukraine issue is not fully shut, nor should it be,” Zhang said.

“China’s position on safeguarding the sovereignty and territorial integrity of all states has been consistent,” Zhang added.

Russia’s territorial integrity is not in question and China does not officially consider Donetsk and Luhansk sovereign states, so Zhang’s concern about sovereignty could only be interpreted as referring to Ukraine.

Prior to the full-scale attack on Thursday, Hua had even more aggressively refuted Putin’s claims to the entirety of Ukraine.

“Taiwan has always been an inalienable part of China’s territory. This is an indisputable historical and legal fact,” Hua insisted, a false claim almost identical to Putin’s in Monday’s speech about Ukraine.

“I would like to emphasize again that Ukraine is not just a neighboring country for us. It is an inalienable part of our own history, culture and spiritual space,” Putin said. “Since time immemorial, the people living in the south-west of what has historically been Russian land have called themselves Russians and Orthodox Christians.”

China’s relationship with Ukraine under Zelensky has been contentious. Zelensky has greatly expanded his power to combat Chinese influence, unilaterally sanctioning a Beijing company for attempting to take over the critical engine maker Motor Sich and then nationalizing Motor Sich when sanctions were not enough of a deterrent. Following Biden’s decision to lift sanctions on Nord Stream 2, however, Zelensky changed his tune, announcing a major infrastructure deal with the Chinese Communist Party and his desire that Ukraine become China’s “bridge to Europe” in conversation with dictator Xi Jinping.

“China is Ukraine’s number one trade and economic partner in the world. And we are interested in the full realization of the potential of bilateral cooperation, especially in the areas of trade and major infrastructure projects,” Zelensky reportedly told Xi.