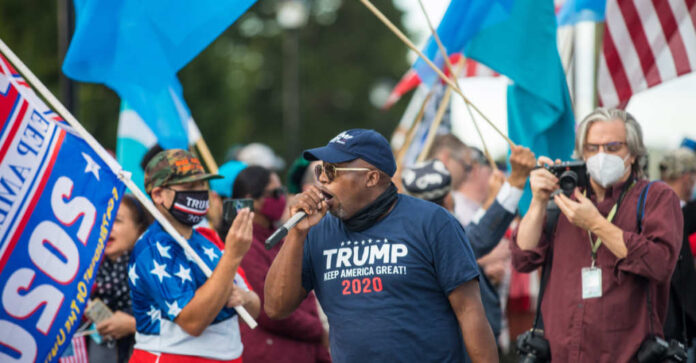 One of the favorite pastimes of liberals is to point to conservatives and call them racist. If it were up to the Democratic Party, they would write the entire Republican Party off as a bunch of old white men.

It’s becoming a bit ridiculous, though. Their finger-pointing isn’t very accurate. And if they want to talk about a party of old white men, how do they explain Joe Biden, Bernie Sanders, and Chuck Schumer? They are calling the kettle black at this point…and they aren’t able to make their accusations stick.

In the past several years, more and more Black people have been coming forward to say that they are proud Republicans. It’s easy to see why, too. If we were to listen to liberals, working hard and planning for the future are marks of white supremacists. What does that actually say about Black people? They don’t know how to be organized, be professional, or work to have a better life? It’s insulting.

As such, Black conservatives are growing…and it’s because of the ridiculous liberal agenda. Black people are tired of being insulted, and they want to fight back against the ‘white supremacy’ that the liberals are trying to create.

Systemic racism doesn’t exist. There are countless examples of how Black people today have the same opportunities as white people.

And as more Black conservatives get involved with the GOP, the accusation of being racist becomes more comical.

It’s become obvious that the GOP has changed its tactic. It’s no longer the party of old white men. It also means that the liberals will need to come up with a new attack tactic.

Steve Friess of Newsweek recently wrote an article of “GOP Bets on Black Conservatives as Key to Victory: We Change or We Die.” The article focuses on how there’s more diversity than ever within the GOP.

Now that the GOP has the ability to appeal to more voters of color, it could strengthen the red wave that we’ve already seen sweeping across the nation. It’s likely that the liberals have already taken note, too, which is why they feel as though they have to make up stories to lure voters back over to their side of the political fence.

Black Republican candidates have done well for themselves. Many are getting more of the Black votes than white Republicans. In some instances, they’re even doing better than Black Democratic candidates.

Democrats, regardless of color, have proven that they don’t have anything to offer. They are looking to simply be a puppet for the old, white people in charge – namely Nancy Pelosi and Chuck Schumer. A perfect example is Georgia Senator Raphael Warnock. The Black senator has done nothing but agree to every liberal agenda that is shoved his way – even when it goes against what the people in his state actually want.

With more Black conservatives taking the lead and showing that they are out to change the world for good, it also silences the liberal cries that systemic racism is a problem. If all of these candidates are Black and have the opportunity to run for Congress, racism can’t possibly exist to the level that the liberals have insisted.

Black communities suddenly have a choice. They can watch things stay the same by continuing to vote for Black Democrats. Or, they can see the change they’ve been begging for – and there are Black conservatives who would love the opportunity to prove themselves.

Either way, the liberal agenda is about to be destroyed.