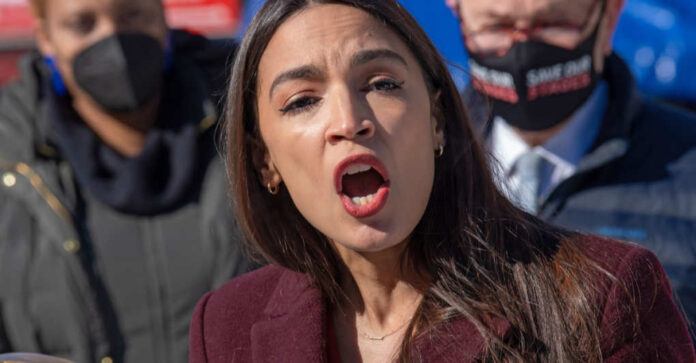 Alexandria Ocasio-Cortex has proven one thing since she squeaked her way into politics. She has shown the world that she is all about drama and making a scene, so she gets to stand at the center of attention. The soap opera star exists to provide an entertainment show for her Twitter followers. His reluctance to engage in the real world shows she could care less about the American people and those she is supposed to represent in the House of Representatives.

The drama queen took to Twitter to show her estranged followers what she did to destress her life. She streamed herself, dunking her face in a cold bowl of ice water which was a waste of her time. The wicked witch must keep her face in that cold bowl of water most of the day since she invents stress for her to live with.

AOC gets bored and plugs her face in front of the computer screen, hoping that someone is just sitting around waiting for her to post something or do something stupid such as dunking her face in cold water. She stated for her followers, “OK, so no lie, I have been very very stressed out lately and today I found myself staying in a stressful mental pattern that was just creating more stress for myself. I wanted to interrupt that.”

She stated that she had read that cold water and putting one’s face into it is how to take care of stress. But that is nothing more than a fake story. The only way to deal with stress is to work the problem and solve the issues. Burying one’s face in the sand, hoping that the problem will disappear, is not a solution.

AOC should be out making plans for trying to help her district grow and improve itself. But she is content to sit back and let people live in poverty so she can govern them as a dictator. Her actions mirror other online challenges that board people without jobs sit around and come up with.

Her liberal nonsense also came out as she scolded people watching the video by stating that people seeing her dirty kitchen should “deal with it.” Her pointless attempt to destress only proved that she is worthless in politics. She has a lot of time on her hands if she can sit around and make herself a spectacle by dunking her face in cold water. It is time for AOC to grow and take life seriously.

She went on to say that “It gave me a brain freeze. But I must say it worked! Turns out dunking your head into freezing cold ice water is a pretty good way to redirect. Hope this helps someone!”

The liberal Washington Post has led people to believe that dunking a face in cold water is a great way to kill stress. But what they fail to mention is that unless the problem is dealt with, the stress will return and usually in great force.

The report claims that it helps to reduce the blood flow to critical areas. But when a body is placed in cold water, the body does not slow down. It speeds up because of the shock. The body goes through a period of shock which is not suitable for the physical body. Constant shock to the body will have consequences that will be felt later in life.

The article went into detail, pointing out that those with physical problems should consult their doctor before slamming their faces into cold water. And the reason for that is that cold water shock is a severe problem. But even worse than that, burying a head in the sand and not working the stress points will never achieve any relief or satisfaction.

AOC is a drama queen looking for her next few minutes of fame on social media. People would do well to avoid watching her for any length of time. She is only good at making threats to people and fake crying about issues that she could care less about.