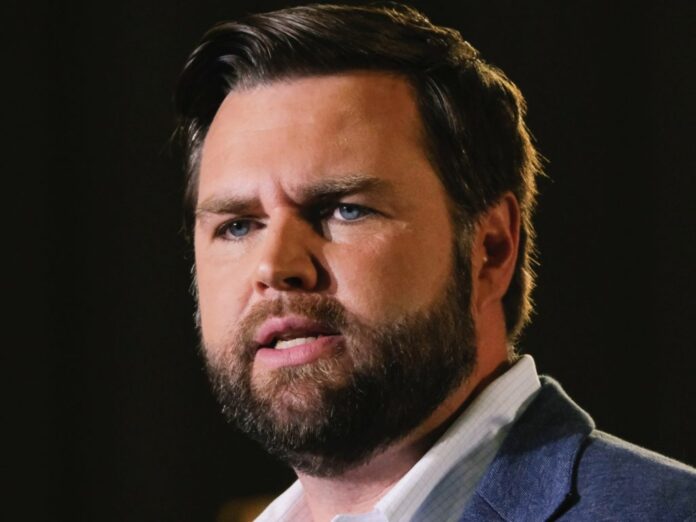 Vance, the New York Times best-selling author of “Hillbilly Elegy,” said Democrats and establishment Republicans “who fail to do anything to stop them” are more concerned with the well-being of foreign nationals and foreign countries than the quality of life of the nation’s working and middle class.

The nation’s ongoing opioid epidemic, where more than 100,000 Americans died from drug overdoses from 2020 to 2021, is just one example, according to Vance.

“One of the biggest ways that the Democrats have failed the working class, have failed the citizens of this country, is that they don’t even care about their citizens compared to the illegal aliens flowing across the U.S. southern border,” Vance said:

Now the Democrats always say that their border policies are compassionate. We know that’s a joke. There’s nothing compassionate about letting drug cartels and sex traffickers control our country as if it were a third-world backwater country. [Emphasis added]

I want to tell you a story about exactly what the Democrats’ border policies do to communities and the people like mine, the people that we fight for as conservatives. I got a phone call about 10 years ago actually and she told me that my mom, my beloved mom, had just had a heroin overdose and was in a coma and was in a hospital just outside of Cincinnati. And I remember thinking to myself that whether she woke up from that coma … she would never meet the grandchildren that my wife and I would eventually have. [Emphasis added]

Now I’m proud to say that about four weeks ago … we celebrated my mom’s 7-year medallion ceremony where she has been clean and sober for seven years. [Emphasis added]

In addition, Vance said Democrats and establishment Republicans have been increasingly interested in foreign affairs halfway around the globe at the expense of working and middle-class American communities.

Russia’s recent invasion of Ukraine and Biden’s deploying U.S. troops to Poland, Vance said, is only the latest instance where the globalist priorities of the nation’s ruling class have superseded the interests of Americans.

“I got a lot of flack in the last week because I had the audacity to suggest that before our leaders obsess over a Ukrainian-Russian border over 6,000 miles away, maybe they better guarantee the sovereignty of their own country and their own border first,” Vance said:

The reason I say that is because we have a leadership in this country that is constantly focused on stuff that has nothing to do with citizens in our country, has nothing to do with the middle-class citizens in my state of Ohio or all across this country, and ladies and gentlemen, it has to stop. I’m sick of it. I’m sick of being told that we have to care more about people 6,000 miles away than we do people like my mom, my grandparents, and all the kids that are affected by this [border] crisis. [Emphasis added]

Indeed, 81 percent of CPAC attendees said illegal immigration to the U.S. is a “greater problem” for Americans than the Russia-Ukraine conflict. In addition, an Associated Press-NORN poll last week found that 76 percent of Republicans do not want the U.S. to be majorly involved in the conflict.

Vance detailed three policy prescriptions to aid in the opioid epidemic and border crisis, including declaring the Mexican drug cartels “a terrorist organization,” requiring proof of American citizenship to collect welfare, and cutting off federal funds to states giving foreign nationals the right to vote.

“Don’t send the military to Ukraine,” Vance said. “Send them to Mexico, and let’s fight back against this poison.”