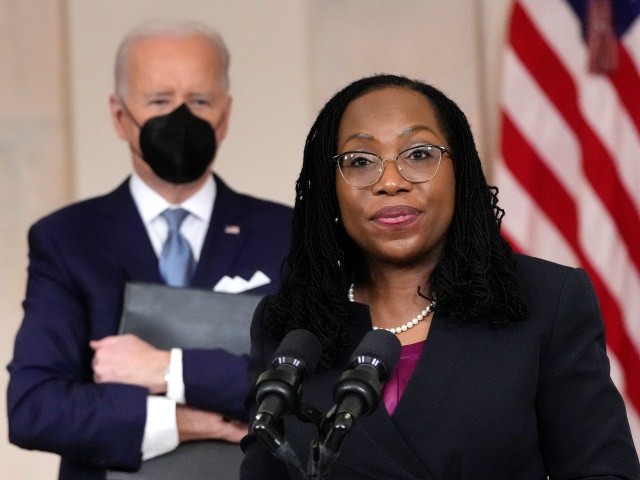 In a handful of immigration-related cases that Jackson has ruled on U.S. District Court for the District of Columbia, she has made a note to employ the term “noncitizen” or “undocumented non-citizens” rather than the terms “alien” or “illegal aliens” that are regularly used in court and in federal statutes.

For instance, in Make the Road New York v. McAleenan, Jackson wrote a footnote in her ruling stating:

The Court uses the term “undocumented non-citizens” throughout this Memorandum Opinion to refer to persons born abroad–the federal immigration statutes call them “aliens”–who are deemed “inadmissible” under 8 U.S.C. ?? 1182(a)(6)(C) or 1182(a)(7) because they have not received authorization to come into, or remain, in the United States. [Emphasis added]

Likewise, in Kiakombua v. Wolf, Jackson notes that “this Memorandum Opinion employs the term ‘noncitizen’ in lieu of the term ‘alien’ to refer to ‘any person who is not a citizen or national of the United States.'”

Ketanji Brown Jackson, nominated to be a U.S. Circuit Judge for the District of Columbia Circuit, is sworn in before a Senate Judiciary Committee hearing on pending judicial nominations, Wednesday, April 28, 2021, on Capitol Hill in Washington. (Kevin Lamarque/Pool via AP)

Dan Stein, head of the Federation for American Immigration Reform (FAIR), said in a statement that Jackson’s “refusal at times to use the term ‘alien’ in the context of interpreting immigration law — a term of longstanding and legally correct usage — indicates a willingness to allow politics and political pressure to influence her judgment.”

“This is of concern to us, as we believe it is up to courts to use the language of the statutory law in decisions interpreting that law,” Stein said.

As Breitbart News reported, Jackson has a mixed record on immigration — twice striking down former President Donald Trump’s border controls but also upholding that federal agencies have broad authority to build a wall along the United States-Mexico border and ruling in favor of regulations to tighten up asylum rules.