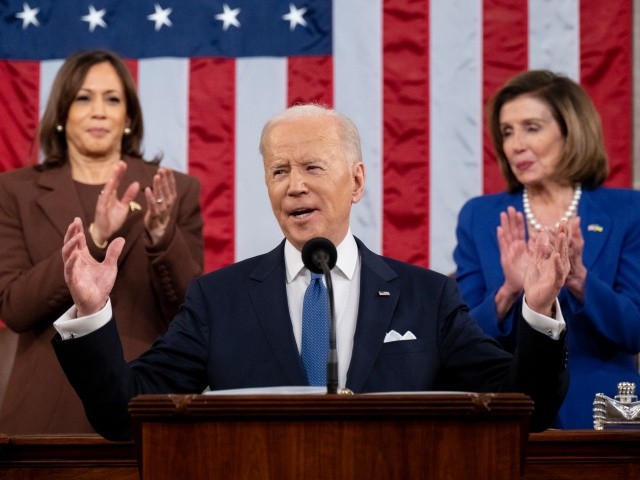 The Washington Post reported that earlier drafts of Biden’s address included an endorsement of banning members of Congress from trading stocks, but a transcript of the speech reveals it was ultimately cut — mentioning only the Russian stock market.

In December 2021, House Speaker Nancy Pelosi (D-CA) stated that Congress and their family members should not be banned from trading stocks because “we’re a free market economy.”

The remark came after it was revealed that 54 Republicans and Democrats in Congress failed to properly disclose their transactions in accordance with Stop Trading on Congressional Knowledge (STOCK) Act.

The watchdog organization Unusual Whales has revealed that, on average, members of Congress beat the market in 2021 with hundreds of millions of dollars in stock trades. Those who faired the best were Reps. Austin Scott (R-GA), Brian Mast (R-FL), French Hill (R-AR), John Curtis (R-UT), Dan Crenshaw (R-TX), and Nancy Pelosi (D-CA).

Likewise, Sen. Jeff Merkley (D-OR) previously said lawmakers are undoubtedly influenced by their stocks when it comes to legislation and the industries they are supposed to be regulating like Wall Street and giant tech conglomerates.

Banning members of Congress from trading stocks is hugely popular among Americans.

A Trafalgar Group survey revealed that 76 percent of Americans believe lawmakers have an “unfair advantage” when it comes to the stock market. Only five percent support permitting the practice.