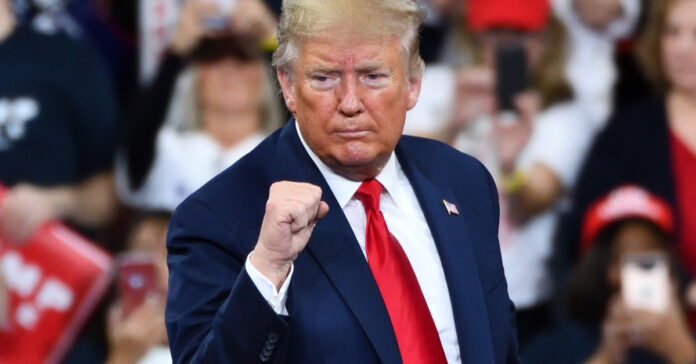 The nasty liberals set a dangerous precedent when they empowered sizeable social media platforms to begin the process of censoring comments and news reports that would cast a dark light on the Democratic movement. Conservatives were stunned to see that accounts were being suspended and, in many cases, deleted because of the simple stories that they would share on their page.

At the start of the warfare on freedom of speech, many conservatives jumped over to the Parler platform, which was then attacked by big tech. Their liberal host also dropped them because the Democrats could not handle the truth being shared on social media. The horrible reality is that for the first time in American history, a socialist government is targeting people for sharing their thoughts and concerns.

Donald Trump took great offense to the way people were being treated simply because liberals had targeted them and ultimately silenced them so they could spread the truth behind the news. And that led to Donald Trump developing his social media app called “Truth Social.” The app is the top-performing app within the Apple marketplace. It did not take long for the first 500,000 people to jump on board.

Joe Biden hates everything related to the United States. His liberal party cannot stand the concept of free speech. They work very hard at limiting free speech by taking advantage of every little opportunity. Democrats tend to get violent and loud when an opposing viewpoint is expressed. They think they can bully people into silence, but that is not the case with Donald Trump.

The app is so popular that early users had to wait several hours to set up their profile and account. People are so sick and tired of being abused by socialist Democrats that they are willing to flock to any site that will allow them to voice their opinions without being threatened by force or other illegal means.

One man named Kevin set out to set up his account and found out that it would take some time. He said that “Every step of the way was difficult because of constant error messages or statements that things were unavailable or wrong. Each step finally succeeded after many failed attempts to complete that step. The software is clunky and unreliable.”

Kevin has said that he did not vote for Donald Trump. It stands to reason that he will have a biased opinion about the new app to help discourage people from not setting up an account. Every new app that comes out will have issues. And it will take some time to get them all fixed.

America is a place where people can speak up and not worry about being silenced. Democrats are running scared now that conservatives have a way of sharing the truth. But the Democrats are desperately seeking ways to change what the Constitution guarantees.

The app is extremely popular, and people will patiently wait to be added and have their accounts created. Kevin is a Democratic plant that wants to discourage people from signing up. But the desire to tell the truth is strong, and anyone that wants to practice free speech will be willing to wait for it all out.

The new app will have its challenges, but knowing Donald Trump will not take long for him to get everything ironed out. One such challenge is coming from Trailer, a solar power company. The logo is very similar to the one that the company uses. They stated, “We are now seeking legal advice to understand the next steps and options available to protect our brand.” Everything will fall into place, and the Democrats will not be able to do anything to stop the way that the truth is told. Americans have the right to be heard. The liberals are violating constitutional authority by forcefully preventing people from stating the truth and what their experiences have been like under the harmful pressure of Biden’s regime.