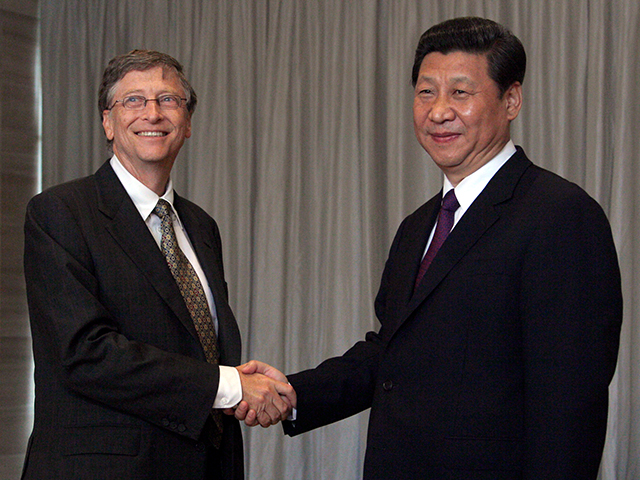 In 2011 — after a decade of alternately predicting China would never be able to police the Internet and helping Communist officials do exactly that — a company called TerraPower that was cofounded by Gates began working with the Chinese National Nuclear Corporation (CNNC) on a “next-generation” reactor.

The project was ostensibly civilian in nature, although Schweizer notes CNNC also works for the Chinese military — and the molten salt reactors TerraPower developed just happen to be “incredibly effective at propelling ships at sea, including military vessels.”

Red-Handed notes the People’s Liberation Army (PLA) was already working on techniques for installing this type of reactor on its aircraft carriers when Gates’ TerraPower teamed up with CNNC.

The partnership ended in 2018 when “policy changes” under the Trump administration “made the project difficult to achieve.” CNNC was later included on a list of Chinese companies linked to the PLA, which would seem to have scuttled its partnership with Gates — although he evidently hopes to continue working on reactor projects with other Chinese companies.

“The TerraPower thing, that was a setback, but there are ways to come back and engage China in a fairly deep way later in the project,” Gates told Chinese state media in 2019.

“China has a lot to contribute,” he gushed in that interview. “China is building about 40 percent of all the nuclear builds in the world.”

“So to the degree we’re allowed, we’re going to be very aggressive about building Chinese partnerships. If we don’t have cooperation, then things like climate change will be much more difficult to solve,” he said.

In December 2021, the Japan Atomic Energy Agency (JAEA) and Mitsubishi Heavy Industries Inc. announced a partnership with TerraPower to build the same kind of nuclear plant Gates wanted to build with CNNC. The plant, which will receive about $2 billion in funding from the U.S. government, is scheduled to open in Wyoming in 2028.

A 2020 Asia Times report on the state of the art in reactor technology pointed out that American firms were leaders in developing molten salt reactors (MSR), but only China has plans to actually build them, and they are energetic plans indeed. China’s MSR program is headed by Jiang Mianheng, son of former president Jiang Zemin.

Molten salt reactors, as the name implies, use a superheated salt solution to transfer energy from the reactor core to external power feeds. In essence, the reactor shoots out liquified salt, bubbling along at roughly 1,200 degrees Fahrenheit, and useful energy is siphoned from that incredibly hot mixture, which flows back into the reactor for another nuclear toasting.

Some of the keen interest in MSRs is due to their theoretically high degree of inherent safety. If any of the molten salt should ever leak out of the system, it immediately cools and becomes solid, trapping radioactive material safely inside. If the reactor runs too hot, the salt becomes too thin for the nuclear reaction to continue, and the whole system gracefully shuts down.

As Red-Handed notes, the other signature feature of MSRs is their small size. The scientists who laid the theoretical groundwork for the reactors in the 1940s imagined them powering airplanes. Modern engineers have proposed nuclear-powered drones that would use miniature reactors to stay aloft for months on end.

Small reactors with safe, sealed systems like MSRs could also lead to an innovation known as the “traveling wave reactor,” another specialty of Gates’ TerraPower — and of his erstwhile PLA-linked partner, CNNC.

Traveling wave reactors create their own fuel in a kind of rolling avalanche of nuclear power. They would only require external refueling once every decade or two, and they burn up a great deal of their own waste.

These are features of clear interest to clean energy proponents, to be sure, but also strong selling points for military planners developing weapons platforms that could be deployed at sea, in the air, or in space for long periods of time. Bill Gates appears remarkably blinkered, to say the least, about the Chinese Communist Party’s desire and ability to weaponize the nuclear technology he wanted to share with them.