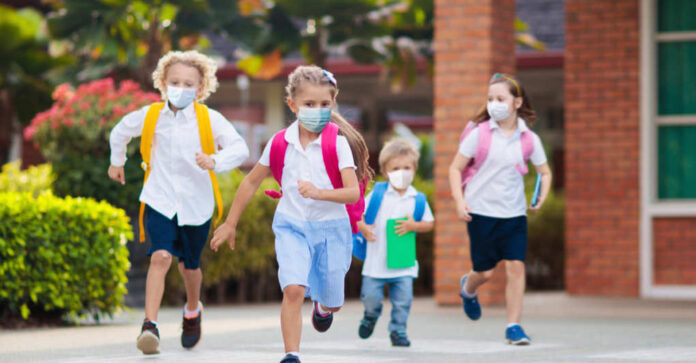 Liberal cities all over the country have decided that it’s finally time to free themselves of masks. Chicago is the latest to lift its mask mandates. Only, they have forgotten the kids.

We have said it time and time again – many experts have said that it’s ridiculous for kids to be masked in the first place. Their transmission rates are much lower. Kids aren’t the ones showing the harshest symptoms or landing in the hospitals, either.

The CDC even said before vaccines were even available, that the 0-19 age group had a 99.99997 percent survivability rate.

Smothering kids in the classroom for eight hours a day hinders the learning process. It damages the socialization that kids need to thrive.

Yet, Chicago is holding strong that kids need to be masked.

Mind you, masks are eliminated – and there’s no longer the need to show proof of vaccination in places like restaurants and bars.

The Tribune made the announcement that parents are still trying to figure out: “Face coverings will still be required in schools, health care settings, and public transportation.” And for the latter, you can thank Pete Buttigieg and the rest of the federal government.

Where is the science? Apparently, Chicago has decided that they are going to dismiss science altogether. Forgetting about the children as the mask mandates are lifted is their way of holding onto what little control they still have left.

As for the warning for everyone else, mayor Lori Lightfoot has said that if COVID numbers spike again, she will “not hesitate” to impose new rules on the city again.