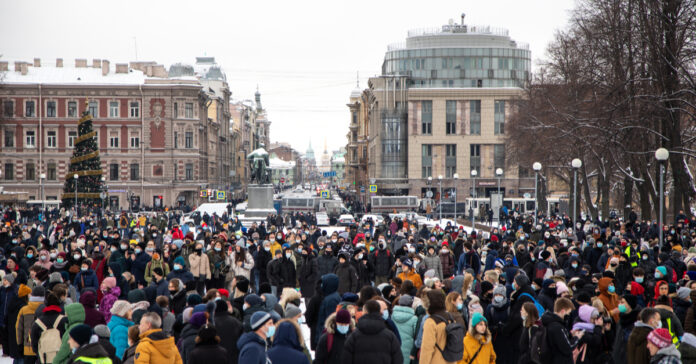 With rockets and missiles streaking across the sky Russian troops began taking over Ukraine in an aggressive predawn attack. Thanks to social media and streaming people across the world were able to join scared Ukrainians as they fled their homeland looking for safety. As Russian paratroopers touched down to take over the Kyiv airport and other crucial targets the anti-war protesters began hitting the streets.

In Moscow Russian newspapers have reported on dozens of arrests that have been progressively more violent. As the police have been cracking down on protesters the same social media that gave the Ukrainians an opportunity to share their fear with the world also allowed Russians to spread their message. With a largely uncensored internet, the Russians have been able to get information and freely communicate.

Media censorship on the other hand is rampant. Speaking out against Putin can be a very dangerous offense, and few have been willing to be critical of his actions. Novaya Gazeta is a newspaper from Russian President Vladimir Putin’s hometown of Saint Petersburg, and they have been one of the few critical voices about his attacks on Ukraine.

Their claims of a crowd of over 200 protesters being shut down by Russian police with megaphones to shout them down and violent arrests have been supported largely by video coming out through social media. By giving the people a voice in print, this paper is allowing the less fortunate Russians who do not have the internet to learn what their President has been doing, and how his police are reacting.

Anton Troianovski is a New York Times reporter who was in Moscow on Thursday. His description of how things unfolded should enrage every American and make them worried for the future. “On the country’s internet, still mostly uncensored, Russians saw their vaunted military sow carnage in a country in which millions of them had relatives and friends. Many of them had bought into the Kremlin’s narrative that theirs was a peace-loving country, and Mr. Putin a careful and calculating leader. After all, many Russians still believe, it was Mr. Putin who lifted their country out of the poverty and chaos of the 1990s and made it into a place with a decent standard of living and worthy of international respect.”

This kind of wolf in sheep’s clothing is the same move President Biden has pulled on Americans – just in reverse. The American people were promised a leader who would be tough on the international stage. He would be firm in ensuring peace built up across the globe, and we would be in a better time. So far, we have received none of that. He called on Canada to not only support but to suggest potentially criminal actions be taken against protesters there. With our protests getting underway, there is no telling what he might do here.

President Putin on the other hand has been very direct in his rhetoric and his promises. As the people protest him being a man of his word, others wait with bated breath to see when he will listen to his people and end this aggression against Ukraine. Given his preponderance to enjoy the adulation of Russian celebrities who have deeply embraced him, only to say enough is enough, he could be stepping back soon.

One of the boldest voices came from Elena Kovalskaya, the director of Moscow’s Vsevolod Meyerhold State Theater and Cultural Center. Her immediate resignation in protest of this aggression was accompanied by a strong message to Putin. “It’s impossible to work for a murderer and collect a salary from him.” Given Putin’s love for the arts and culture, it would be surprising if this doesn’t motivate him to end this rather quickly; even if Ukraine won’t agree to lay down their weapons and keep out of NATO.