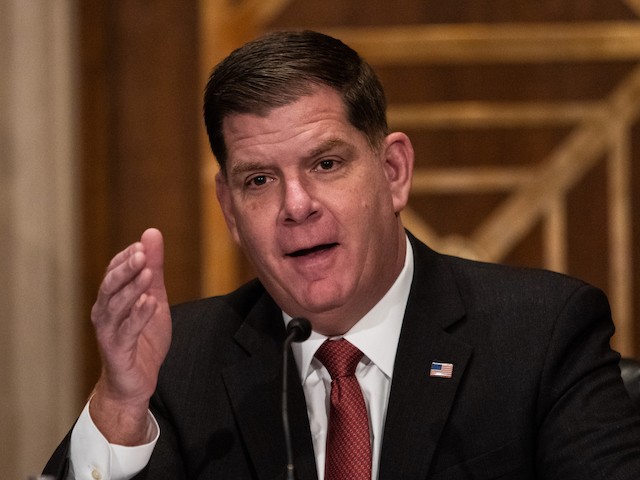 On Friday’s broadcast of the Fox Business Network’s “Varney & Co.,” Labor Secretary Marty Walsh said that increasing domestic oil drilling hasn’t been on the table in the White House, but will “have to be a conversation.”

Host Stuart Varney asked, [relevant remarks begin around 1:05] “Will the president acknowledge that we’ve got a shortfall in domestic production so we should make it up? Will he drill?”

Walsh answered, “I can’t answer the question for the president, but I can tell you that we’re looking at all avenues on how do we deal with energy in the United States of America -.”

Walsh responded, “Well, it hasn’t been to this point, and it’s certainly, looking at what’s happening in the situation in the world right now, that will be — have to be a conversation.”

Varney then asked, “Do you think we should be drilling more of our own oil and gas?”

Walsh responded, “Again, I’m not in a position to answer that question at this point. But certainly, we have to watch and see what happens with Russia, we have to see what the world’s doing with Russia…yesterday, we heard the speaker of the House, we heard Sen. Manchin (D-WV), Sen. Murkowski (R-AK) asking us to shut off buying gas from Russia, and if we did something like that, we’d have to figure a way to fill that.”