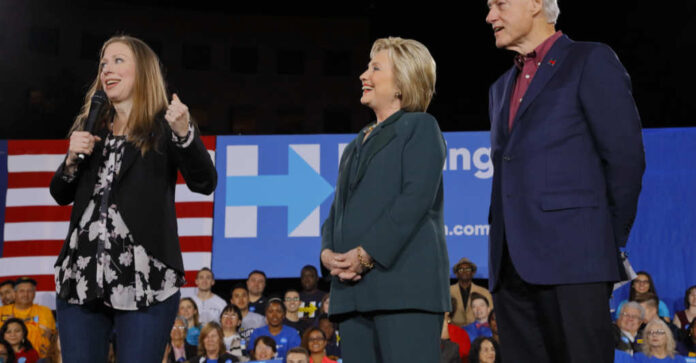 The Clinton Family believes that they have the same political legacy as other families, such as Bush. However, only Bill was president. Hillary bounced around to a few positions but failed to clench the title that would allow her into the Oval Office. And Chelsea, well, Chelsea was only the First Daughter. She held no political title and, therefore, has no clout.

Chelsea Clinton was still a child when her father was president. Now, she is a writer and a global health advocate. And she has access to millions from her parents as they swindle their way across the country.

Whatever Chelsea has to say is not important. Yet, the co-hosts of “The View” couldn’t wait to have her on their show. It’s as if anyone with any real political clout rejected the invitation to come on the show – and they were left with a Clinton.

Liberals stick with liberals, so we already knew the overall view that Clinton was going to have to Biden’s address.

Sunny Hostin asked for Clinton’s opinion on the speech since she “studied at Oxford, international relations.”

What she went on to say makes us wonder if she was watching the same State of the Union that the rest of us were. “He’s so proud to be an American. And he wants what’s best for our country. And after the last administration, just that feeling of, like, oh, God, like, thank you. Thank you for that pride. I felt included in that pride, and it was so palpable.”

What in the world is she talking about?

She makes it sound like Trump wasn’t patriotic. Everything that Trump did was to protect Americans and to offer us more security in our own country. Biden got rid of the funding for the wall. He literally allowed tens of thousands of immigrants into the U.S. without even bothering to check to see if they are murderers and rapists first. That’s not pride. That’s cowardice.

And should we talk about the pride of America when Biden was talking about the flag-draped coffins that came back from Afghanistan? He didn’t even have the courage to mention that there were 13 of them. Instead, Representative Boebert had to yell from the audience to remind him that he was responsible for “Thirteen of them.”

A president who is filled with pride for his country should know and recognize the number of people who were killed due to his own bad decisions.

A president who is filled with pride for his country admits when he is wrong and vows to do better.

Instead, Biden lied. He lied about how his Build Back Better plan won’t cost Americans any money. And he lied about his ability to bring prosperity to the country. If he’d just open up the pipelines, he could allow us to be energy independent and save money on important things like gas and heating.

But, of course, Chelsea Clinton didn’t touch on any of that. She just smiled and told “The View” co-hosts exactly what they wanted to hear: Biden is the best.

It’s no wonder that Sunny, Joy, and Whoopi invited a liberal onto their show to talk about the SOTU. If they had asked a conservative voice onto the show, they would have had to talk about that awkward excitement from Nancy Pelosi when Biden began talking about burn pits.

So, we heard from Clinton but…as we could have already gathered….no one cared. She’s just another liberal who will get excited over Biden so that we can pretend that our president is a capable leader.