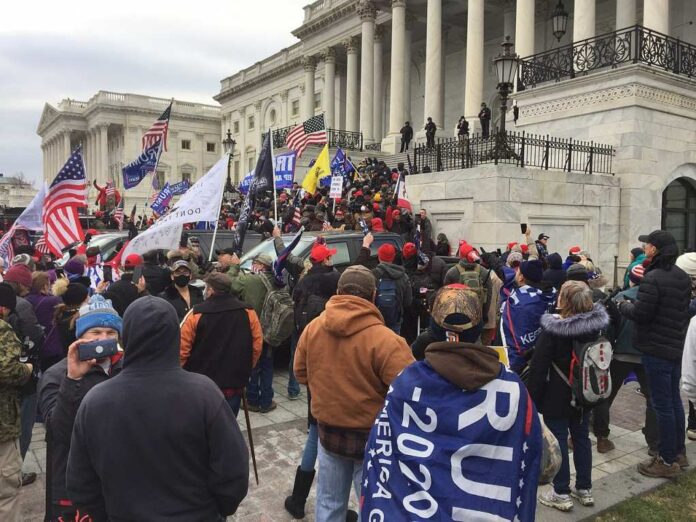 There’s no light at the end of the tunnel for the man known as Q-Anon Shaman. Jacob Chansley, the guy beneath the fur hat and war paint, is the prolific figure who seemingly led an angry mob through the front doors of the Capitol Building on January 6. Some even believe him to be the mastermind behind the entire Q-Anon movement.

If Chansey stands any chance of receiving leniency in his case, he probably hired the wrong attorney to represent him. Albert Watkins, who is leading the charge for Chansey, not only can’t keep his mouth shut, but he’s saying all of the wrong things. He sounds more like a prosecuting attorney rather than a defense lawyer.

Watkins said Chansley and the rest of the arrested rioters couldn’t help themselves. He said their mental incompetency led them to fall for the rhetoric Trump was tossing at them. They’ll believe anything.

Here are Watkins’ exact words. “A lot of these defendants… they’re all f-ing short-bus people. These are people with brain damage, they’re f-ing retarded… But they’re our brothers, our sisters, our neighbors, our coworkers—they’re part of our country. These aren’t bad people, they don’t have a prior criminal history. F**k, they were subjected to four-plus years of GD propaganda the likes of which the world has not seen since f-ing Hitler.”

At least Watkins did make an attempt to get his client released on bail but it didn’t go so well. The attorney blamed Chansey’s actions on Trump. Chansey couldn’t help being sucked in by the constant barrage of lies and propaganda Trump was spewing.

He also cited Chansey’s dietary requirements as a valid reason for not keeping his client confined. Both arguments could not have been weaker. Since nothing of any real substance was offered Chansey remains under lock and key, and with this liberal-leaning doofus working for him, he better get comfortable. He might be in there for the long haul.

No matter how you dissect what Watkins said, it reflects disfavorably on Chansey. He’s a borderline braindead nut-case who turned evil thanks to a lying president planting seeds of discord in his dirt-filled head. Sound about right? Braindead? Evil? Yeah. This ought to help Chansy’s case.

It only goes downhill from here since Watkins can’t keep his story straight. With one brush he’s painted Chansley as a gentle soul who wouldn’t step on an ant. Kind and peace-loving. Despite what videos reflect, he was telling the protestors to turn back.

But, with the swirl of another brush, Watkins paints the Shaman as an easily manipulated imbecile who can barely feed himself. He couldn’t help but do what his beloved president asked of him and everybody who was there that day is the same way. He’s no different from them.

Both paintings are lousy pieces of art, but what do you expect from a lawyer who’s spent the better part of his career chasing ambulances? He was a bargain and Chansey is not wealthy.

In Chansey’s defense, Watkins told “Newsmax’s” Greg Kelly, “There are 10 million miles of video footage of my client. None of it displays anything that is resembling violent, destructive. He wasn’t armed. He wasn’t shrouding his identity. In fact, he was the most visible person there. He won the best costume contest of the day.”

“But he also helped police. He called for everyone to leave once President (Donald) Trump announced that it was time to go home. This man is a peaceful man. He’s a gentleman.” Once again there is confusion. Was Chansey there in his manipulated monster personality or as his dual peace-loving side?

Democrats would have their flocks believe it was Trump himself who led the protestors to violence. He was leading the charge up San Juan Hill like his presidential predecessor Teddy Roosevelt did. Though Watkins concurs with this insane belief, he said it’s only true of everyone else who was there. Chansey was merely trespassing with the best of intentions.

Watkins further stated that his brainless client wasn’t led to rage by Trump, who “can’t even string words together,” like the rest of the protestors were. He showed up out of concern over what he knew would happen.

It seems like it’s Watkins who can’t string sentences together. His flip-flop portrayals of his bison-horned client coupled with his condemnation of Donald Trump and the thousands of other protestors who fought the crooked election is spelling out a loss for Chancey.

If Q-Anon Shaman doesn’t find a real lawyer soon instead of this low IQ two-bit lawyer who barely passed the bar on his fifth attempt, he’s going to the Federal big house where he’ll either be praised or poked by his fellow inmates or perhaps both.