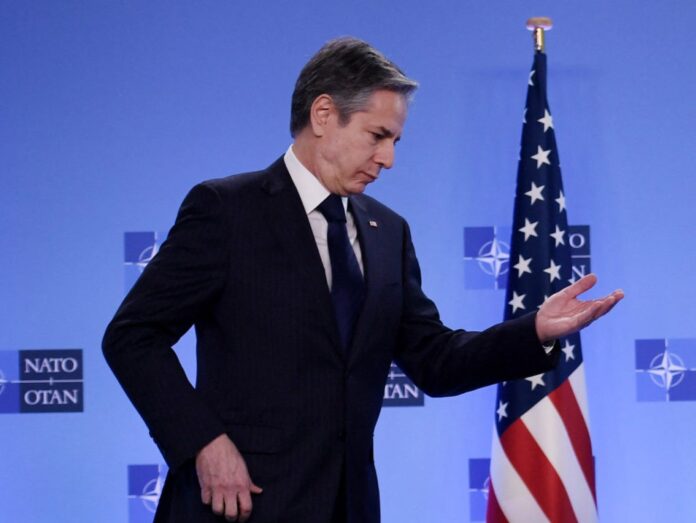 “We are looking actively now at the question of airplanes that Poland may provide to Ukraine and looking at how we might be able to backfill should Poland decide to supply those planes,” Blinken claimed during a visit to Moldova, which borders Ukraine and, like its larger neighbour, involuntarily hosts Russian-backed separatist territory.

“I can’t speak to a timeline but I can just say we’re looking at it very, very actively,” Blinken added in comments reported by The Financial Times.
A spokesman for the Joe Biden administration also discussed the proposed jet swaps with POLITICO, with an official telling them that the White House was “working with the Poles on this issue and consulting with the rest of our NATO allies”.

Mere hours beforehand, however, the Chancellery of the Prime Minister of Poland, Mateusz Morawiecki, had categorically denied that any such deal was on the cards, telling an Eastern European online media outlet reporting the claims that they were “FAKE NEWS”.

“Unfortunately you are spreading misinformation,” the Chancellery’s verified Twitter account posted in response to NEXTA, which had cited a Wall Street Journal report as indicating that Poland “may” provide Ukraine with MiG-29s and Su-25s.

“Poland won’t send its fighter jets to #Ukraine as well as allow [Ukrainian pilots] to use [Polish] airports,” they added.

On March 1st, the Ukrainian air force had claimed on its verified Facebook account that it was being provided with dozens of MiG-29s and Su-25s by Bulgaria, Poland, and Slovakia — all NATO and EU member-states — and that “If necessary, they will be able to base at Polish airports from which Ukrainian pilots will perform combat tasks.”

Whether such a scheme had ever been agreed behind the scenes is unclear, but the governments of all three supposed donor countries flatly denied that the transfers were happening.

The alleged plan for Ukrainian pilots to operate warplanes out of Poland could prove particularly dangerous, with the Russians highly likely to consider striking the bases.

This would raise the possibility of all NATO joining the war — although as it is theoretically a defensive alliance it might not do so if it was decided that Poland had, by allowing its bases to be used to strike Russian forces, been the initial aggressor.

NATO was not obliged to aid Turkish forces in their invasion of Cyprus in the 1970s, for example.