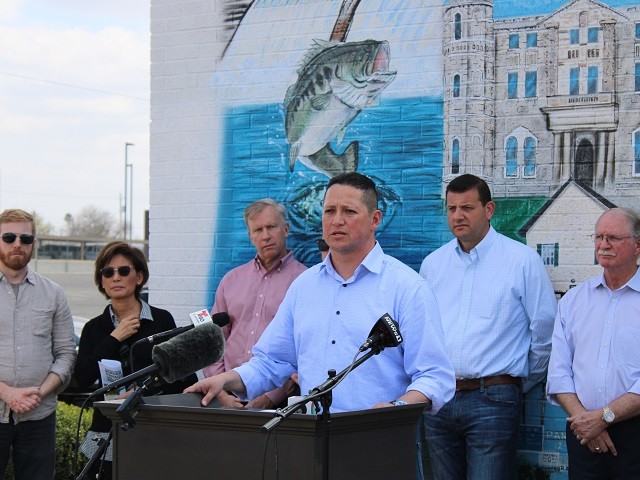 The group received a briefing from Border Patrol personnel at the Del Rio Sector headquarters and toured the Del Rio Border Patrol Station where they observed agents involved in processing the hundreds of migrants apprehended daily. The delegation also traveled to a remote site in the sector to observe a demonstration of surveillance technology deployed in the region.

Gonzales and the group of legislators met with community business leaders and local law enforcement representatives before holding a press conference to discuss their findings. The delegation concluded the visit after touring the Del Rio Port of Entry and receiving a briefing from Customs and Border Protection employees.

Gonzales told reporters this is the largest delegation of legislators to tour the region since the start of the border crisis. Congressman Calvert told the media he is alarmed that people on the terrorist watch list had been apprehended and worries not about those who the Border Patrol have apprehended but those that have eluded apprehension.

“For that reason, and a lot of other reasons, we need to stop people from flooding across this border and give the Border Patrol the resources they need,” Calvert told reporters.

Congresswoman Miller-Meeks of Iowa expressed concerns with several issues regarding the current influx of migrants in the area. Miller-Meeks commented to reporters “Rightfully so, we know all eyes of the nation and the world are on Ukraine but that should not deter us from looking at the crisis that is here on our southern border.”

As a physician, Miller-Meeks says she is concerned not only about the national security interests but also about the lack of COVID-19 testing and the influx of fentanyl contributing to overdoses across the county.

When asked about the lack of media access to the tour and no direct access to Customs and Border Protection facilities, Congressman Gonzales told Breitbart Texas the current administration is failing in this endeavor. Gonzales says even members of Congress must ask specifically worded questions to receive answers from the Biden administration.

“The Republican party has called for more transparency with this administration on everything from the debacle in Afghanistan to what is occurring in Ukraine, the inflation numbers, to border security. We agree completely that they need to unveil and let the truth be known” he added.