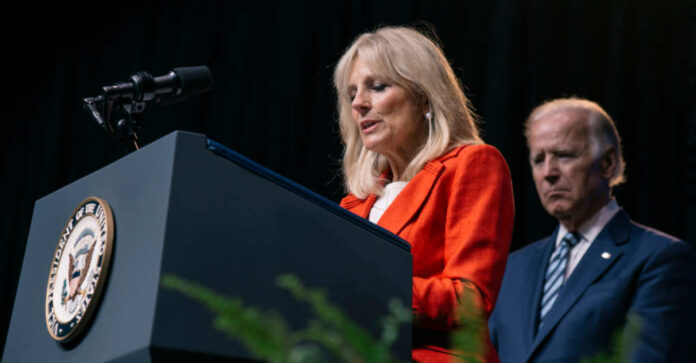 We expect Joe Biden to get confused. It’s become the thing that he’s best at, which is really sad when you think about the fact that he’s the President of the United States. He’s obviously suffering from dementia, but the liberals simply don’t want to admit to that yet.

When he introduces Kamala Harris as the president, we laugh and roll our eyes because it’s all that we can do at this point. Clearly, she’s not the president, and we have to be thankful for that. However, the number of times he has referred to her as such makes us wonder if we don’t know the full plan that the Democratic Party has mapped out for the country.

What’s concerning is when Dr. Jill Biden refers to Kamala Harris as president. Obviously, Jill can’t be the First Lady if Harris is the president. Is she suffering from mental issues just as her husband is? Does she know something that we don’t know?

When Dr. Biden spoke, she was introducing Harris for a Black History event at the White House. She explained how Harris has been a “partner to Joe” on a number of issues, including voting rights.

Then came the introduction, “Ladies and gentlemen, the president…”

The crowd laughed, which is when the First Lady realized her error. “I just said that to make you laugh,” she commented before introducing Harris properly.

Harris took to the stage to thank Dr. Biden and comment about how she has enjoyed being at the White House with “our incredible President Joe Biden.”

After that, it was as if both of them had to keep emphasizing the roles. There was no need for Harris to make the comment about President Biden after the First Lady provided the introduction. This was more for everyone who was listening than anyone else.

We wouldn’t want America to realize that Joe Biden isn’t actually in charge, would we? After all, we’re watching war break out in Ukraine thanks to Russia’s invasion – and Biden decided to take another vacation.

Meanwhile, President Zelensky of Ukraine has actually stayed in his country, showing what a true leader looks like. On Twitter, the comment was made that every woman has “at least a small crush on Volodymyr Zelensky.” And men and women alike jumped on the feed to share that yes, they are admiring the man from afar because he has shown what it’s like to be a leader and stand by his people.

There’s nothing that Biden could do that would generate that kind of Twitter feed. Instead, most of the comments about anything that Biden does is met with disgust. Why? He hasn’t show that he’s willing to lead, let alone stand by his people. We’ve seen his failures as a politician for over four decades – and as president, he’s proven that he’s no different.

Perhaps the thing we have to worry about the most at this point is that we’re not even sure who is running our country. Is it Biden? Is it Harris? Is it someone in the background who is playing puppet master?

The number of slip-ups between Joe Biden and Kamala Harris as they introduce one another is embarrassing. And we expected more of Dr. Jill Biden, which is why we really have to wonder if Joe really isn’t planning on being the president for much longer…