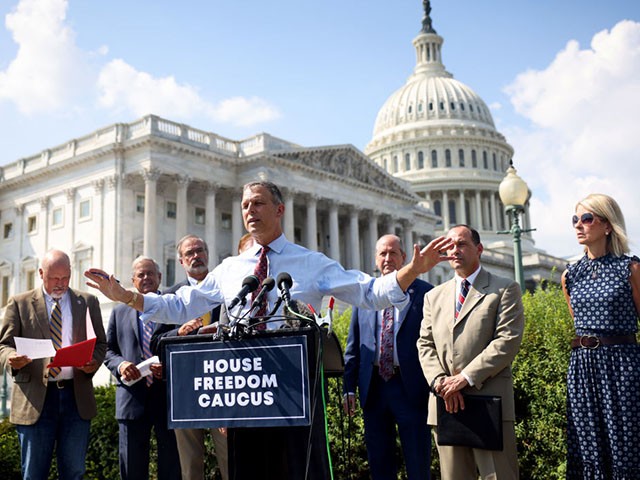 House and Senate appropriations leaders continue to draft the parameters of a long-term omnibus spending bill as the government faces a potential shutdown if Congress fails to pass the bill by the end of Friday.

Board members of the House Freedom Caucus wrote in a letter to House Republican Leader Kevin McCarthy (R-CA), requesting that he fight to ensure that Congress has a “robust” debate on aid to Ukraine, unleash policies to reduce energy costs, end the remaining COVID vaccine mandates, and secure the southern border:

Second, our Republican Conferences are united in our belief that it is critical we pivot our federal energy policy. For example, on March 1, 2022, House Minority Whip Steve Scalise outlined key actions that President Biden should immediately take to unleash American energy and counter Russian aggression:

Whip Scalise is right. We believe that American energy fuels freedom throughout the world and urge you to unite both the House and Senate Republican Conferences in demanding and fighting for the inclusion of these policies in the upcoming appropriations bill.

Third, the President gave lip service to the country moving forward from COVID – this despite his administration’s policies forcing Americans to be vaccinated or lose their job, and his recent request for additional COVID-19 funding. It is unconscionable that we would continue to fund government enforcement of vaccine mandates at the expense of healthcare workers, federal workers including Border Patrol, and our brave service members – some of whom are being asked to be at the ready in Eastern Europe. We urge you to use the funding bill(s) to demand the administration remove vaccine mandates and immediately fully reinstate all military and federal employees who lost their jobs due to those mandates.

“We request Republican leadership focus not on “parity” of increased government spending and rushed legislation to “avoid a shutdown,” but rather take specific action to change the direction of this country on these important issues, among others, by using the power of the purse granted to us in Article I of the U.S. Constitution,” the House Freedom Caucus board wrote.

Ten Senate conservatives said in a statement that they would refuse to expedite the passage of the omnibus government funding bill unless there is a roll call vote on an amendment to defund the remaining vaccine mandates.

“We have consistently opposed President Biden’s federal COVID-19 vaccine mandates, which would force millions of Americans to choose between an unwanted medical procedure and being able to provide for their families. For legal, constitutional, and policy reasons, we remain strongly opposed to the mandates and will continue to work to end their imposition on Americans,” the senators wrote in a Dear Colleague letter.

“These COVID-19 vaccine mandates amount to a serious abuse of both federal power and executive authority. … President Biden has no business forcing people to make a tragic choice between unemployment and an unwanted vaccination,” the senators continued. “Additionally, it is particularly troubling for the President to ask thousands of troops to amass in eastern Europe while simultaneously demanding they get a politicized vaccine.”

“History will bear record of whether we chose to endure tyranny, or oppose it, in this pivotal moment. We invite you to stand with us and oppose the continued funding of these mandates,” the senators concluded in their letter.