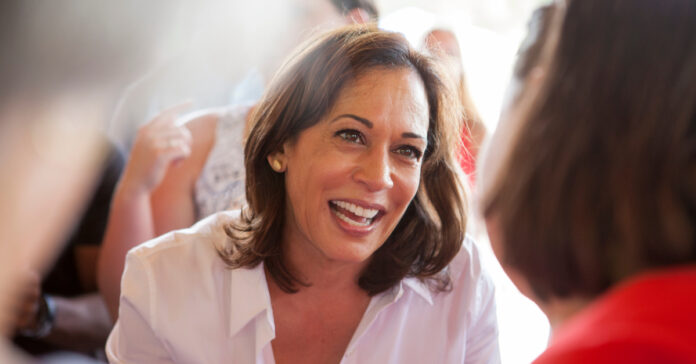 Kamala Harris has taken the idea of being a fool to the highest extent. At every turn, she can open her mouth at she does, and she keeps shoving her foot deeper and deeper into the throat that paved the way to get her where she is now. This past Sunday she was chosen to speak at the commemoration of “Bloody Sunday” in Selma, Alabama and she used that time to push more politics into history.

On Sunday, March 7th, 1965, white Alabama state troopers savagely attacked the civil rights activists in Selma as they marched along the Edmund Pettus Bridge. This march was for their voting rights. Something they had long lacked equality in. The response from the state police was far beyond appropriate or even needed as this was peaceful for a protest of this magnitude. So having Harris speak at such a historic place and date, was crucial.

“Those brave marches continued to push forward to secure the freedom to vote. And they were pushed back. Today we stand on this bridge at a different time. We again, however, find ourselves caught in between injustice and justice, between disappointment and determination, still in a fight, to form a more perfect union. Nowhere is that clearer than when it comes to the ongoing fight to secure the freedom to vote.”

Harris’ message about the freedom to vote is spot on. Voting is one of the most patriotic, basic, and necessary things for an American to do. This right is guaranteed to Americans. However, much like the right to bear arms, there are things you must do to exercise that right. To buy a firearm from a dealer you need to produce a photo ID, and many want to enforce the same requirement for voting.

These rules are largely supported by anyone who isn’t a member of the progressive left. It’s very basic to obtain. Form of photo identification, and in this country, it is rather simple. Yes, there are places in rural Texas (for example) that require a long drive to get that ID. You also must take that same kind of drive to get certain foods that the closest tiny grocery store doesn’t carry. That’s the penalty for living in a rural area.

It’s no secret, and the requirement to produce ID to keep the security of one of America’s most basic rights should be obvious. Nobody has argued against the showing of an ID to get a firearm, and much the same that is also a protected right, but people like Harris would have you forget that as soon as you can.

These integrity laws are being put into place, but Harris thinks they are an attack. “A record number of people cast their ballots in the 2020 elections. It was a triumph of democracy in many ways. But not everyone saw it that way. Some saw it as a threat. And so as powerful people have done many times in our nation’s history, they launched an assault on the freedom to vote… We brought the freedom to vote act, yes, the John Lewis Voting Rights Advancement Act to the floor of the United States Senate. And on the night of Jan. 19, every Republican senator in the United States Senate voted to block passage of this law.”

The real attack here is the attacks from Kamala Harris, President Biden, and the rest of the left. They want to strip America down and turn it into their socialist utopia. That won’t be happening any time soon, and the American people won’t stand for it either. No matter how she tried to vilify state senators for refusing to bow down and sign off on her racially tainted incentive, the American people are not falling for it. We have seen how this show plays out, and with the 2022 midterms coming up, it’s time we turn the channel.