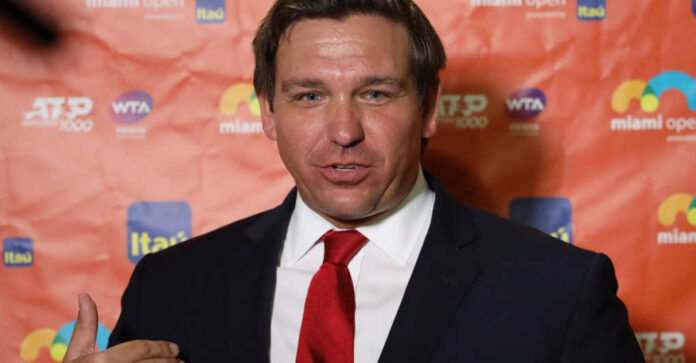 The Democrats took the COVID-19 pandemic and made it a political sideshow. They have their clowns running around telling people that the new variants will kill everyone, and the only way to defeat the virus is to wear a mask. The nutty nonsense that Joe Biden and the rest of his entourage have been spouting off has embedded itself in people and has made them fearful at best.

Ron DeSantis also came under fire from the left when he told students that they did not have to wear their masks anymore. The Democrats were just beside themselves. They were now surrounded by many kids without masks on, and they did not know how to handle the situation.

The Floridian governor has mentioned that the drama being promoted by the left is nothing more than a bad show. The governor was trying to make the point that the Democrats keep telling the kids to keep their mouths covered while, at the same time, those liberals are doing away with their mandates. But Biden refuses to let the kids take them off.

The Democrats are making a great show of things and how they believe they should be able to get away with violating their rules. The political message being sent out by the Democrats is that the virus will only attack non-election years. But when an election year comes around, people can expect the virus to take a backseat and wait until new leaders are chosen.

The video DeSantis shows clearly illuminates the hypocrisy coming from the Democrats. The Daily Wire noted that “The video went on to show Governor Gavin Newsom (D-CA) and Los Angeles Mayor Eric Garrett (D), mask-free at the last two football games of the NFL season — and ended with the news update announcing that a number of Democratic governors had gotten onboard with the rolling back of statewide mask mandates.”

Democrats are enraged with Ron DeSantis because he would never get behind the crazy lockdowns that the liberals wanted to implement all over the nation. He chose a different path for Florida, and it worked brilliantly. The state never suffered any economic setback but only prospered because the economy was left open.

DeSantis had a lot of things he had to deal with, and he worked through them all. When Joe Biden told the nation to wear three masks, the Floridian governor said to take them all off. The support for the viral mandates was never there. It was all made up by Biden so he could have control over people.

During the speech, DeSantis was to give many students were placed behind him wearing masks. And that was when he told them to take them all off. The comical display of fear coming from the left needed to stop. Those kids were masked up and placed behind DeSantis to tell the world that masks were still needed.

The original video showed DeSantis walking up to a podium to speak and address the students who would stand behind him.

A few of the kids would remove their masks. But the liberal parents would go on the defensive and claim that DeSantis forced the kids to take off their masks. The political setup had failed yet again to paint Ron DeSantis as something he is not. The nasty liberals tried to call the governor a bully but ended up making themselves look bad again.

Joe Biden has taken the pandemic and used it to gain power. But as soon as the election year hit, the pandemic suddenly fled away. Biden proved that he was stretching the pandemic out for selfish reasons with his own words. He wanted to make people believe that the only way to return to normal was to give up freedom and submit to the new overlord.

Ron DeSantis knows what it will take to make America better again. He did it for Florida, and he will continue to fight for the rest of the country.