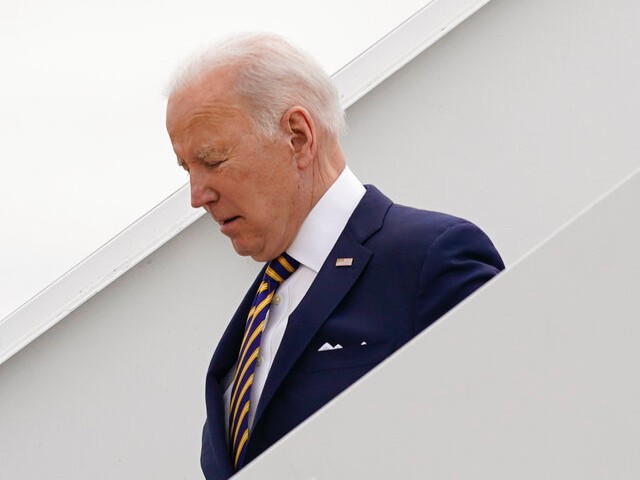 The survey also found that sixty percent of respondents disapproved of Biden’s job performance. Only 20 percent of Americans strongly approve, compared to 50 percent who strongly disapprove.

Biden’s approval rating has consistently declined in the week after his first annual State of the Union address. Unsurprisingly, this decline in approval rating is happening during the same time Americans are paying more at the pump for gas than ever before.

As of Thursday morning, the national average price for a gallon of regular gasoline reached $4.318, according to AAA. This is the highest price ever, not accounting for inflation, and the fourth day in a row gas prices hit a new record high. Before this week’s dramatic increase in price, the previous high was $4.11 per gallon, set on July 17, 2008.

Gas prices have increased by nearly $1 in the past month. The average price for a gallon of gas one month ago was $3.477.

Biden puts the blame on Russian President Vladimir Putin’s recent invasion of Ukraine, but gas prices have consistently risen throughout his presidency. One year ago today, the average gas price for a gallon of gas was $2.815.

“Can’t do much right now. Russia is responsible,” Biden told reporters after being asked if there is anything he can do about rising gas prices.

There have been bipartisan calls for Biden to ramp up domestic oil production in the wake of the record-high gas prices.

Democrat Sen. Jon Tester (D-MT) spoke out against the Biden administration’s rumored plan to import oil from Venezuela. “Well, we shouldn’t be advancing other countries that don’t share our values,” Tester said. “So, I think that the opportunity here is to do it domestically, create jobs here, deal with it domestically, and also see if we can help Europe out, too.”

“President Biden, stop begging dictators to produce the energy that we need… don’t go to Russia, don’t go to Iran, don’t go to Venezuela when the answer is right beneath our feet. It’s time for President Biden to say yes to American energy,” Republican House Whip Steve Scalise (R-LA) said during a press conference.