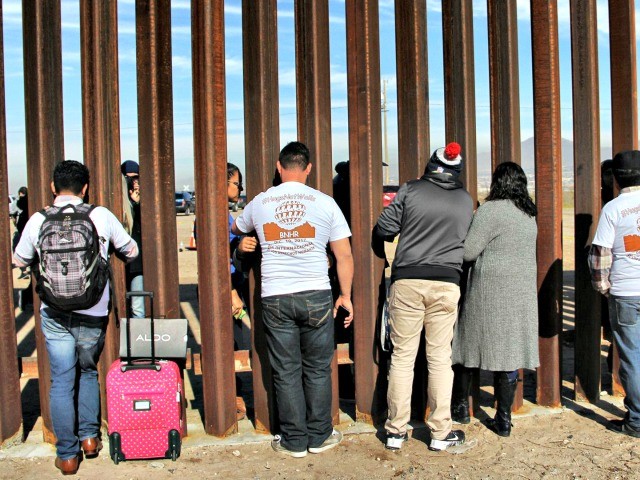 Do you favor legal immigrants being allowed to bring with them only a spouse and minor children, or do you favor them also eventually bringing in other adult relatives in a process that can include extended family and their spouses’ families?

57% opposed allowing any immigrant to bring or petition for any family other than spouse and minor children.

The Rasmussen numbers from March 3 also show that 35 percent of blacks want the immigration inflow to be halved to a level below 500,000 per year. Just 20 percent want the inflow to be increased.

Beck is a former journalist and is the author of the October 2021 book, “Back of the Hiring Line: A 200-Year History of Immigration Surges, Employer Bias, and Depression of Black Wealth.”

Newly arrived immigrants stop for water while walking from the border to a U.S. Border Patrol detention facility on December 08, 2021 through Yuma, Arizona. U.S. Border Patrol agents had earlier said the facility was full and had stopped transporting migrants to the center. (John Moore/Getty)

However, black voters’ loyalty to the Democratic Party — and for its promised economic transfers to poor people — has minimized the political impact of migration on black voters. For example, Pew reported in 2021 that Joe Binder won 92 percent of the black vote, which compressed almost one in five of his voters. The Brookings Institute reported in June 2021 that Trump got 12 percent of the black male vote in 2020 — amid the media-magnified, election-year uproar over the “Black Lives Matter” campaign.

Since the 2020 election, Democrats have largely walked away from that campaign and its demand to “defund the police.”

But the Rasmussen results are backed up by numerous other studies.

“Black people are sympathetic to immigrants but they are also not in favor of more open borders,” wrote Niambi Michele Carter, author of “American While Black.” Carter is an assistant professor at Howard University. She continued:

Blacks believe in the right [of migrants] to self-determination and are more supportive of policies that allow for immigrant incorporation. On the other hand, blacks as Americans … are concerned that immigrant groups’ inclusion will come at their expense.

For African Americans who lost a job to an immigrant, working-class membership resulted in a 13 percentage point increase in the probability of support for an increased federal role in workplace oversight [againt employment of illegal immigrants] when compared to middle-class African Americans who experienced a similar loss.

The political result is that:

Working-class African Americans are significantly more supportive of policies that seek to: decrease the number of immigrants coming to the United States, increase the federal role in verifying the employment status of immigrants, and attempts to amend the Constitution’s citizenship provisions.

Nteta also provides evidence that economic concerns are more important for working-class blacks than for working-class whites, saying “it appears that class membership is a more powerful force in shaping the attitudes of Blacks in comparison to Whites.”

Most black politicians recognize the latent black hostility to migration and so try to minimize their role in the party’s migration politics. In September 20211, Breitbart News reported:

Thirty-five CBC legislators did not sign the letter — and the 18 signers mostly come from districts where black voters are in the minority. The 2:1 split spotlights the unpopularity of the proposed amnesties among blacks, despite top-level pressure by Democratic leaders, business leaders, and the pro-migration media.

Americans blacks have gained the most ground during the 1924 to 1965 era of low migration, according to a review of Beck’s book by Mark Krikorian, the director of the Center for Immigration Studies:

With mass immigration surging back as shipping lanes reopened after the [first world] war, Congress reduced the flow via the Immigration Act of 1924. Given that the law was partly shaped by the racialist hokum that was the style at the time, it is ironic that it became the single greatest engine of black progress in American history.

[Author Roy] Beck quotes Fortune magazine’s reporting that “after the immigration laws choked off the European labor supply. … Labor agents roamed the South, promising the moon or better.” Poor blacks — and whites — streamed out of the South to fill jobs that were previously unavailable to them.

While there was still discrimination in the North, the modern jobs and higher wages were a boon for those who undertook the Great Migration. Black Americans’ incomes were still below those of white Americans, but they grew nearly twice as fast during the mid-century immigration lull. And Beck makes a convincing case that the benefits of the immigration restriction — rising black incomes, greater mobility, growing union membership — were necessary, if not sufficient, factors in bringing about the civil-rights revolution.

And in another irony, it was precisely the civil-rights ethos that ended up pushing black workers back to the end of the hiring line again. Signed less than two months after the Voting Rights Act, the 1965 Hart-Celler immigration law was explicitly seen as a civil-rights measure … Beck writes that “the 1965 act set in motion a series of policies that loosened labor markets by flooding the hiring lines with foreign workers and betraying a century of struggle toward economic and political equality by Black Americans.”

Since at least 1990, the D.C. establishment has used a wide variety of excuses and explanations to justify its policy of extracting tens of millions of migrants and visa workers from poor countries to serve as workers, consumers, and renters for U.S investors and CEOs.

The economic strategy of extraction migration has no stopping point, and it is harmful to ordinary Americans because it cuts their career opportunities and their wages while also raising their housing costs.

A U.S. citizen girl shows her American passport during a demonstration of migrants and asylum seekers at the San Ysidro crossing port asking U.S. authorities to allow them to start their migration process in Tijuana, Baja California state, Mexico on March 23, 2021. (GUILLERMO ARIAS/AFP via Getty)

An economy built on extraction migration also radicalizes Americans’ democratic, compromise-promoting civic culture and allows wealthy elites to ignore despairing Americans at the bottom of society. Migration is also backed by university progressives who desire to manage the chaos of a diverse society rather than being forever sidelined by cooperating citizens in a stable Republic.

Unsurprisingly, the wealth-shifting extraction migration policy is very unpopular, according to a wide variety of polls.

The polls show deep and broad public opposition to labor migration and the inflow of temporary contract workers into jobs sought by young U.S. graduates.