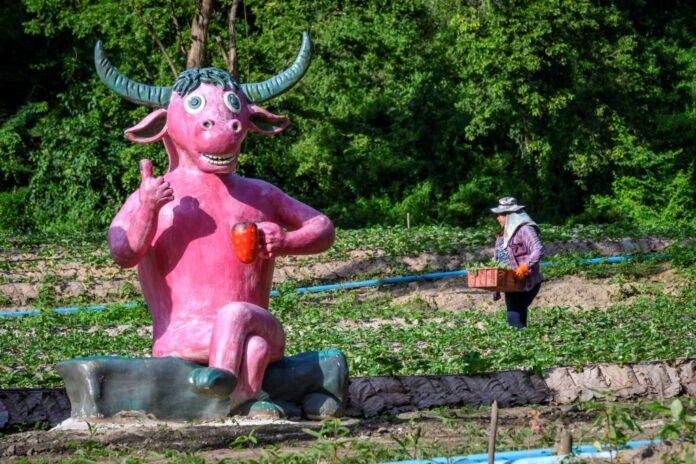 The government of Mae Chaem district in Thailand’s Chiang Mai province launched the campaign on May 20 to encourage its residents to register for Chinese coronavirus vaccinations. Once vaccinated, Mae Chaem residents will be eligible to enter a raffle for a chance to win a young cow worth about 10,000 baht ($319) starting June 7.

“Our vaccine registration numbers have gone from hundreds to thousands in a couple of days,” Thamtharanurak told Reuters on May 20.

“The villagers love cows. Cows can be sold for cash,” he added.

Mae Cham district is home to roughly 60,000 people. Thamtharanurak told Coconuts Bangkok that Mae Cham hopes to vaccinate about 2,000 residents per week through the new campaign.

“Other provinces in Thailand have also come up with creative incentives to boost registration, such as gold necklace giveaways, store discount coupons, or cash handouts,” Reuters reported Thursday.

The Thai federal government said it plans to inoculate 70 percent of the country’s population against the Chinese coronavirus by the end of 2021 but has struggled to make significant progress towards this goal due to widespread vaccine hesitancy among Thai people. Thailand’s government has administered just 2.3 million doses of coronavirus vaccines to date, the German broadcaster Deutsche Welle (DW) reported May 20, citing data compiled by the University of Oxford. This figure accounts for roughly two percent of Thailand’s population of nearly 70 million.

“Trust is earned. You cannot build it overnight so when the government says people should go and get themselves vaccinated, people tend to be hesitant because they are not sure of the side effects and the efficacy of the vaccine,” he said.

Thailand’s federal government says it plans to roll out a revamped inoculation campaign against the Chinese coronavirus next month when locally manufactured doses of the coronavirus vaccine developed by the British-Swedish pharmaceutical company AstraZeneca become available.