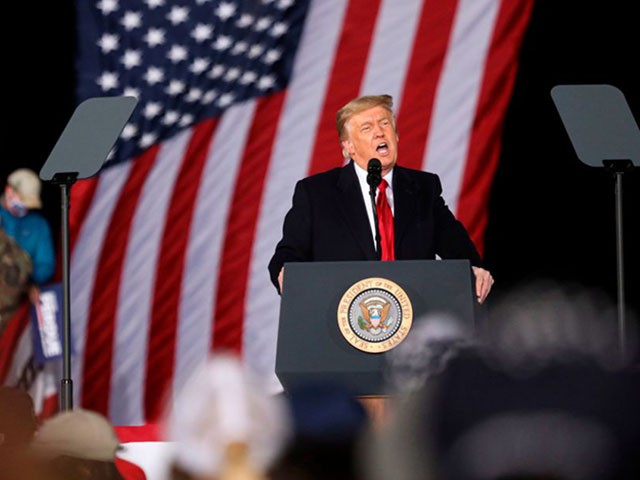 Trump will host the event on Saturday, March 26, in Jackson, Georgia, a solid red county that the former president won by nearly 60 points in 2020.

Perdue, who is competing in a heated gubernatorial primary race against incumbent Gov. Brian Kemp (R), said in a statement he “look[s] forward to welcoming” Trump to Georgia and also made a jab at Kemp for “caving to radical liberals.”

“I’m proud to have President Donald Trump’s endorsement and look forward to welcoming him back to Georgia to rally support for our campaign,” Perdue stated. “Georgians are ready for a bold conservative who will fight the political establishment, instead of caving to radical liberals like Brian Kemp has done every step of the way.”

The primary race, which takes place May 24, has drawn national attention, largely because of Trump, who has been outspoken in his support for Perdue and disapproval of Kemp over Georgia’s 2020 election process.

Perdue has latched onto Trump’s grievances as he campaigns across the state and is heavily promoting that he is backed by the former president as a strategy to raise awareness of the endorsement, which could close what is currently a roughly ten-point polling gap between him and Kemp.

Trump has already bet on six Republican candidates in Georgia — whom he will likely highlight during his upcoming rally — and several of those candidates are directly tied to his ultimate goal of unseating Kemp as retribution for his narrow loss to now-President Joe Biden in 2020.

Trump’s rally this month will take place in the Tenth District, which Jones celebrated in a comment on social media, stating, “Looking forward to welcoming President Trump to Jackson County in Georgia’s 10th Congressional District! Save Georgia. Save America.”

Trump is also backing Rep. Jody Hice (R-GA), who is hoping to unseat Secretary of State Brad Raffensperger, who drew significant ire from Trump in 2020 after the five-member State Elections Board, chaired by Raffensperger, changed various voting procedures ahead of the 2020 primary and general election because of coronavirus surging and legal pressure from Democrats.

Trump has also endorsed U.S. Senate candidate Herschel Walker, the Georgia football legend who represents a rare case of being backed by both Trump and Trump’s establishment foe, Senate GOP Leader Mitch McConnell. On Friday, Walker, who has chosen not to take sides in the gubernatorial battle, was in D.C. visiting McConnell and other “future colleagues,” according to his social media.