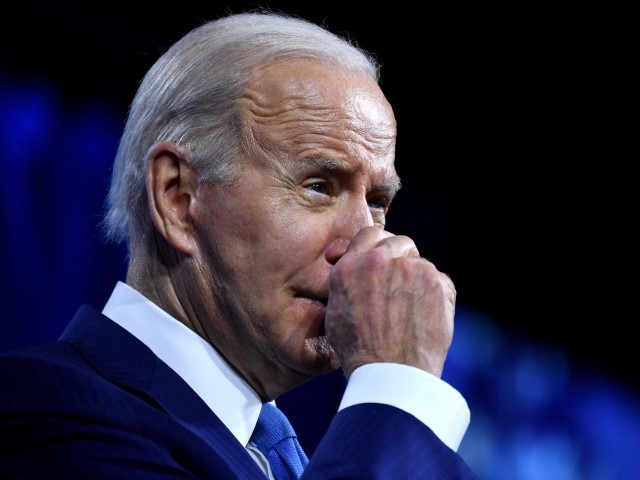 Only 37 percent of voters approved of Biden after he blamed Putin for inflation, a Monday Civiqs poll revealed. Fifty-four percent disapproved.

The sagging poll numbers must be a continuing disappointment for the president, who may have hoped to regain favorability during the Ukrainian war. The president has used the Ukrainian war to justify high gas prices and inflation that largely occurred in 2021 but have continued to soar since the war commenced.

“I’m sick of this stuff… The American people think the reason for inflation is the government spending more money,” Biden said on Friday in Philadelphia. “Simply. Not. True.”

“Democrats didn’t cause this problem. Vladimir Putin did,” Biden claimed.

Again on Monday, Biden reiterated a similar line in Washington, DC. “Make no mistake-the current spike in gas prices is largely the fault of Vladimir Putin,” Biden claimed. “Not a joke.”

Though gas prices have risen about 74 cents since the Ukrainian war, they were already nearly one dollar more expensive than the year prior. Tuesday’s national average price of gas ($4.316) is just two cents off record highs.

Inflation was also soaring before the Ukrainian war. Forty-year-high inflation was felt in December of 2021 and has continued into February. According to data released by the Department of Labor on Thursday, prices rose 7.9 percent compared to a year ago, a 40-year record high.

The poll has been sampling registered voters on this subject since January 20, 2021.