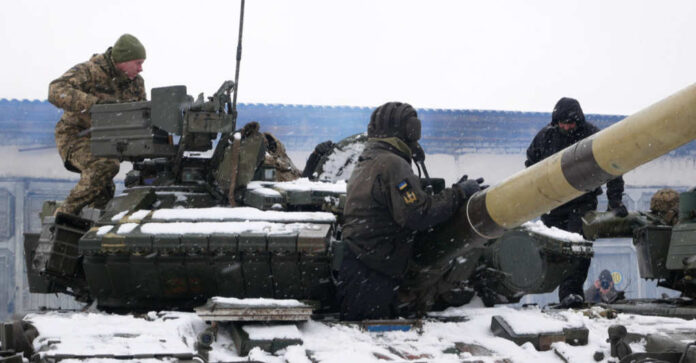 The House Permanent Select Committee on Intelligence’s (HPSCI) top Republicans are speaking out to warn the American people. This warning is something the American people cannot take lightly, and it is something they may feel like they have heard before, but this isn’t the Cold War. This is heating up in a way many of us cannot fathom, and it could get very ugly very fast.

Speaking with Fox News, a ranking member of the HPSCI Rep. Mike Turner (R-OH), spoke openly about the possible increase in action to nuclear assaults. “The growing threat of nuclear aggression from our adversaries was confirmed by our Intelligence Community in today’s hearing. The Biden Administration is currently undertaking its Nuclear Posture Review which will dictate our nuclear policy and the modernization of our nuclear triad. We must act now to update this critical capability, making certain we have a safe, secure, and reliable nuclear deterrent to counter our adversaries.”

This kind of update is something the US cannot do without. These systems and their capabilities keep the country safe and secure. From acting as a deterrent to the detection of potential threats, they must function properly, or else America will suffer greatly. Yet the energy sector and the void the banning of Russia created is increasing that risk as well as bringing out other potential hazards for the country.

House Republican Conference Chair Elise Stefanik (R-NY) has been incredibly critical of President Biden and his use of the Russian invasion to deflect any blame for our current energy crisis. Speaking to Fox News Digital after a hearing about the Russian threat and how to handle it.

“Make no mistake, Joe Biden’s war on American energy is to blame for the price of gas hitting record highs. Biden is using Russia’s war in Ukraine as a shield for his Far-Left anti-energy agenda. Instead of unleashing American energy dominance at home, the Biden administration is turning to other foreign dictators and Russia-aligned regimes to fill this need. We must unleash American energy dominance and no longer depend on our foreign adversaries for oil and gas. That is the only way America can reverse the historic gas prices hurting families across the country and ensure our energy and national security.”

This push Stefanik and others are leading for America to stop relying on other countries is something we as a nation have discussed for decades. While the Democrat’s long-term plan of using everyone else’s resources so we are the only ones is a great plan for down the line. Yet, there is an increasing likelihood that the country and much of the world will no longer be as dependent on fossil fuels by the time that happens. As such, lower demand means lower prices.

By stepping away from the long game and instead focusing on getting America back on the right track immediately, President Biden and the rest of the leadership would have the potential to prevent an economic shutdown here in America. The people don’t need higher costs and worse conditions. As a nation, we were already having trouble affording things with the pandemic. While the stimulus checks were great lifesavers for many Americans, they didn’t provide the long-term assistance many needed.

Now with the further increases in energy sources, food, and housing because of inflation Americans need more help than before. Yet there is no help coming from Washington. As Stefanik referenced, the deflection by Biden to blame Russia is the standard type of answer for him, but it does nothing to change the situation. It does nothing to get America moving forward. With his Transportation Secretary Pete Buttigieg telling people to buy a $60k Tesla if they don’t like the gas prices, when many cannot afford to make rent and bills, this administration is too far out of touch to be successful at this point. We need change, and we need it now.