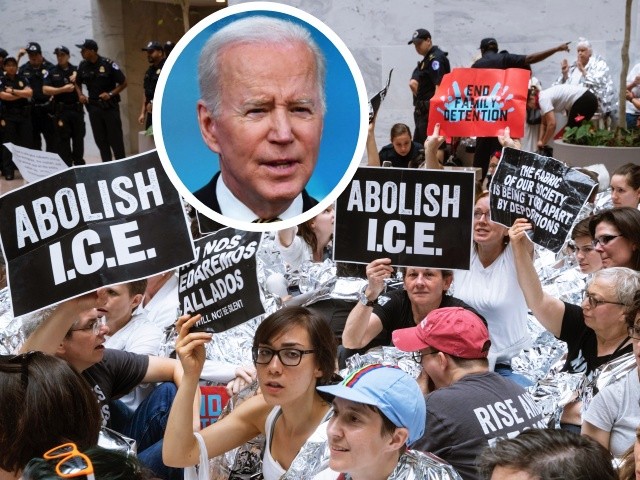 Last year, President Joe Biden and his top Department of Homeland Security (DHS) officials implemented a series of orders protecting most of the nation’s 11 to 22 million illegal aliens from arrest and deportation by Immigration and Customs Enforcement (ICE) agents.

The most expansive is Biden’s so-called “sanctuary country” orders that prevent ICE agents from arresting and deporting most illegal aliens by focusing on a small percentage who commit violent crimes, are terrorists, or who are known gang members.

In addition, Biden has given illegal aliens a number of “protected areas” where they can avoid arrest and deportation, is currently working to further crack down on ICE arrests, and has shielded illegal aliens from being arrested at most courthouses.

Altogether, the moves resulted in massive drops in arrests and deportations of illegal aliens, though the administration has refused to publish additional data that would show the scope of the lack of interior immigration enforcement under Biden.

As a result, the figures indicate, more criminal illegal aliens are continuing to live freely in American communities without the fear of being arrested and deported by ICE agents.

“As I’ve warned for months now, Biden is mass freeing criminal illegal aliens from our nation’s prisons and jails and then releasing them into our neighborhoods, near our schools and offices, and all across our nation. A truly sinister policy,” Stephen Miller of America First Legal and former senior adviser to President Trump wrote in a statement.

The all-important ICE detainer data — where agents request local law enforcement agencies to turn criminal illegal aliens over to their custody instead of releasing them back into the U.S. interior — fell sharply, according to Dinan’s report.

One ICE source told Dinan that agency officials have had the full data for months but have refused to publish it. When ICE officials finally published its annual report earlier this week, none of this specific data was included.