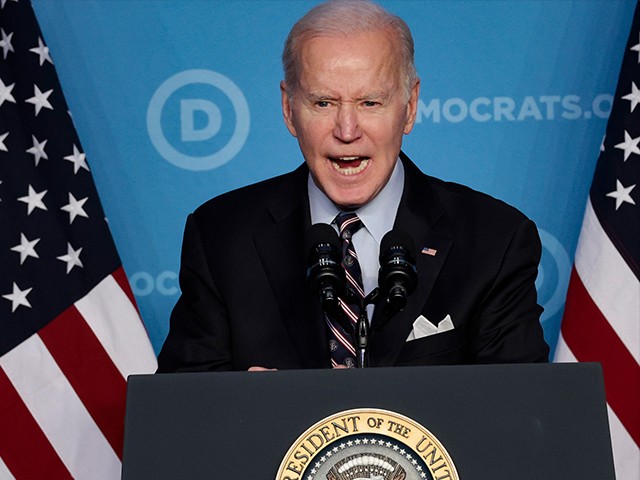 “Has the country become more united, more divided, or not really changed since President Biden took office?” the survey asked.

A plurality, 48 percent, said the country has become “more divided,” compared to 15 percent who said “more united” and 35 percent who said it has “not really changed.” This serves as yet another blow for the commander-in-chief, who chose “unity” as one of his top priorities upon taking office. However, he has continued to drive wedges between Americans over his first year in office, particularly after targeting unvaccinated Americans and warning that his patience was wearing “thin.”

According to Monmouth, “divided” is one of the top words Americans used to describe the U.S. in its current state, but other words or phrases included “confused,” “trouble,” “mess,” “fractured,” “lost,” “disappointing,” “broken,” and “chaos.”

According to the survey:

Nearly half of Americans (48%) say the country has become more divided since Biden took office. Just 15% say it has become more united and 35% say it has not really changed. Throughout most of Trump’s term in office, about two-thirds of the public felt the country had become more divided. When Monmouth asked poll respondents to use one word or phrase to describe the United States of America today, the most common response was “divided” (see word cloud image). This sentiment accounts for more than 1 in 10 responses when combined with related words such as polarized, conflicted, and fractured. Other commonly mentioned top-of-mind words are chaos, mess, confused, and disappointing. In all, 76% of poll respondents used a negative word to describe the current state of the country while just 15% used a positive one.

The survey also showed Americans holding a dire outlook for Biden’s future and the impact he will have on the country, with 58 percent having a pessimistic outlook about the policies Biden will pursue over the remainder of his presidency. Of those, 41 percent are “very” pessimistic.”