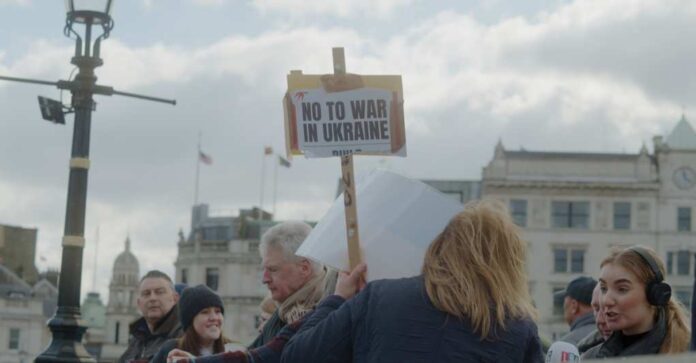 Russian state television is picky about what they’ll allow news broadcasters to say. Any words that might reflect poorly on the actions of the motherland’s government, or God forbid Vladimir Putin himself, is expressly forbidden and carries a harsh penalty. So one brave television journalist found a way to express her objection to the war with Ukraine without uttering a single syllable.

Marina Ovsyannikova interrupted a live broadcast when she snuck up behind the news anchor and flashed a large cardboard sign straight at the camera with the words “NO WAR.” Ovsyannikova said that it had been “impossible to stay silent,” and that she feels compelled to inform the world of how most Russian citizens abhor the invasion and are totally against it.

Ovsyannikova remembers shivering with fear during the bloody conflict between Russia and Chechnya where she grew up. She was only a small child at the time but the memories remain all too clear. “I worry about Russian soldiers… I think they really don’t understand why they have to do this, why they [are] fighting,” she said in a telephone interview.

A Moscow court found Ovsyannikova guilty of organizing an “unauthorized public event” but let her off easy with a $280 fine because of her being a public figure whose sudden disappearance might only cause increased skepticism. The charge hardly describes the crime but it was the best the court could do since she didn’t actually say anything.

When the Kremlin lacks the proper terminology to describe a person’s ‘so-called’ criminal activity they refer to it as “hooliganism” which gives them lots of leeway in determining an individual’s ultimate fate. Some go to Siberia. Some go home.

Ovsyannikova didn’t initially plan on sticking her sign in the camera’s face. She had planned on just standing in the background but then realized that viewers couldn’t really tell what she was holding so she moved in. She said she was “afraid until the last minute.”

“I decided that I would be able to overcome the guard who stands in front of the studio and stand behind the host. So I moved very quickly and I passed by the security and showed my poster.”

Pulling no punches, Ovsyannikova hit Putin square in his breadbasket. “What is happening in Ukraine is a crime, and Russia is the aggressor country, and the responsibility for this aggression lies on the conscience of only one person. This man is Vladimir Putin.”

“Unfortunately, for the past few years, I have been working on Channel One and doing Kremlin propaganda, and now I am very ashamed of it. It’s a shame that I allowed to speak lies from the TV screens, ashamed that I allowed [sic] to zombify Russian people,” she said.

In reference to Russia’s annexation of Crimea in 2014, Ovsyannikova admitted being ashamed for keeping quiet. She claims it was only the beginning of Russia’s long-term plan and that Putin is not going to stop with Ukraine.

It’s already known how Putin has solicited the help of China and Syria so how can anyone possibly doubt what Ovsyannikova said and predicted? She was also dead on target by saying that every corpuscle in the blood of thousands of innocent men, women, and children, yes, children, is on the hands of one evil madman, and you know his name. Vladimir Putin.