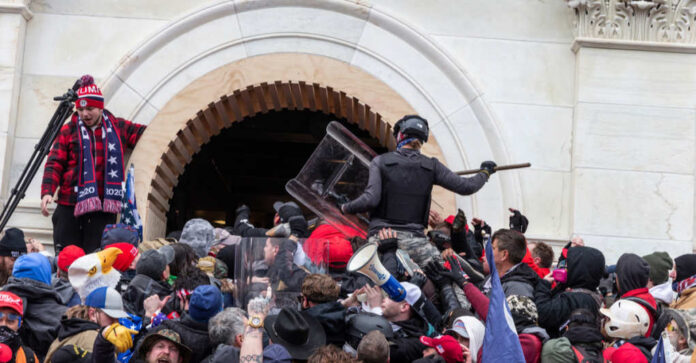 The January 6 protests were a significant moment of history in the making. People gathered outside of the Capitol Building demanding that their leaders not certify the election results until things could be audited.

The Democrats were appalled that people were practicing their constitutional rights to protest. And when the massive crowd decided to enter the complex, the liberals had their reasons to seek out examples to abuse and prosecute to teach people that no one can protest while they are in power.

Brad Knowlton was one of those that entered the building on January 6. Little did he know that he would be one of a selected few targeted and made an example of what happens in a communist-run America.

The nasty Democrats believe that the Capitol Building is their castle that no commoner can enter. But as the protestors walked up to enter the building, they were met by police that allowed them access to the hallways. The Daily Wire reported that footage showed protestors talking with police who told them they could enter as long as nothing was vandalized.

Knowlton was allowed in the building, and he stayed for just under 20 minutes. But the Democrats needed someone to make an example out of, so they found Knowlton’s picture and found where he lived. He was arrested and held in prison. The liberals have sought to banish him and his family by disrupting their lives even before his trial. To the Democrats, he is guilty until proven innocent.

The Daily Wire also found that FBI agents raided his home looking for maps and diagrams of the building, hoping that they could pin him as a terrorist that plotted his entry into the complex. But there was nothing to be found.

Knowlton has had to hire a team of lawyers to keep him from losing his freedoms before being found guilty. Alan Dershowitz is an attorney working with him. He stated that “He went to Washington to exercise his First Amendment right to petition the government for what he believed was a redress of grievances. And he’s been lumped together with people who caused damage or intended to obstruct. He wasn’t intending to do that. He just intended to protest.”

Law enforcement officers were known to hold the doors open for people to make their way through the building. The people knew that they were allowed into the building. The police officers did not try and stop the people because there was no need to keep peaceful people from protesting legally. Knowlton was part of a group escorted by officers, and he was out two minutes later.

The Democrats hated the fact that Americans were protesting the controversial win of the Oval Office. They had to act and make their presence known by targeting peaceful protesters and putting on a show to try and make the Republicans look like violent protesters. They quickly forget that they are guilty of murder and violent attacks during the presidency of Donald Trump.

The man’s attorneys have screamed that he was never violent or told that he could not be in the building. The injustice being done against Knowlton is typical Democratic behavior. The liberals have no problem trampling on the rights of conservatives as long as it serves their purpose.

Part of the injustice also includes the Democrat’s refusal to admit that their supporters crossed barricades and occupied the Congressional office of Senator Chuck Grassley when it came time for the confirmation vote of Judge Brett Kavanaugh. There was never an arrest made of charges filed against any person.

Joe Biden leads a violent group of liberals that want to turn Republicans into criminals. They hate that they stand in the way of the Democrats being able to overrun the country with their liberal agenda. They seek every opportunity to prove they are not a force to be opposed. But in America, it is perfectly legal to protest peacefully and illegal for the liberals to abuse that freedom.