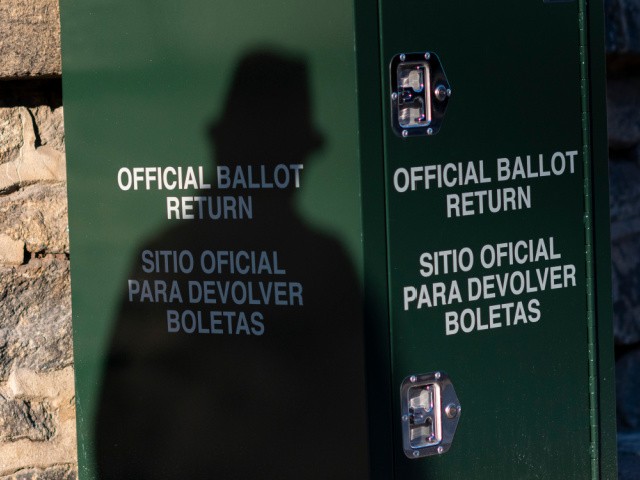 The case, Tiegen v. Wisconsin Election Commission [WEC], revolves around a WEC policy adopted during the 2020 presidential election that allowed absentee voting via drop boxes and ballot harvesting. The circuit court ruled that the WEC’s memoranda violated the state’s election statutes, which say that absentee ballots “shall be mailed by the elector, or delivered in person, to the municipal clerk issuing the ballot or ballots.” The brief, which was joined by both the National Republican Senatorial Committee (NRSC), and Republican Party of Wisconsin, asks the Wisconsin Supreme Court to uphold the lower court’s ruling.

“The RNC is joining with the NRSC and Wisconsin Republican Party to file a Supreme Court amicus brief in Wisconsin because appointed election officials have no right to circumvent election laws duly passed by state legislatures,” RNC Chairwoman Ronna McDaniel said in an exclusive statement to Breitbart News. “Wisconsin has clear laws against ballot harvesting, but activist members of the unelected Wisconsin Election Commission disregarded them in the 2020 election. Republicans will not allow such un-democratic attacks on election integrity to go unchallenged.”

NRSC Chairman Sen. Rick Scott (R-FL) also gave a statement to Breitbart News, emphasizing a “threat to the integrity of our votes.”

“We need maximum participation in our elections with zero fraud, but we have unfortunately seen unelected bureaucrats and election officials recently carry out activities across our nation that have threatened the integrity of our votes. In Wisconsin, we are now seeing a rewrite of voting laws to include unsupervised, vulnerable drop boxes which is not only against the law but Americans overwhelmingly reject,” Scott said.

“Americans want secure elections and what’s happening in Wisconsin is incredibly concerning. I’m proud to join Chairwoman McDaniel and the Republican National Committee in filing this amicus brief and hope the court acts decisively to protect our elections,” he continued.

According to the filing, the WEC is only authorized to administer and enforce Wisconsin statutes “as expressly set forth by the Legislature” and has “no authority to promulgate new election-related laws.”

“To the contrary, WEC’s new methods of delivery of completed absentee ballots–untethered to any legislative grant, authorization, or safeguards–are ripe for fraud, undue influence, or similar abuse, which is exactly what the Legislature expressly intended to prevent when it authorized voting by absentee ballot,”” the brief contends.

The brief also notes that an administrative rule in the state must be “published in official registers” after “public hearings, written input, and a series of complicated bureaucratic checks before being implemented” to ensure that an agency is acting within the bounds of its statutory authority and in an otherwise reasonable manner.”

The brief poses two legal questions for the Wisconsin Supreme Court: whether state statutes governing the methods for delivery of completed absentee ballots mean what they say and whether the WEC can ignore those statutes and create its own method for delivering those ballots.

The GOP groups argue that the statute should be interpreted as written and that the new methods of delivery created by the WEC exceed the commission’s statutory authority, violate the separation of powers, and were procedurally improper under the state rule-making process.

“As the circuit court correctly held, WEC has unilaterally created new methods of delivery of a completed absentee ballot–methods that have no trace in the Wisconsin Statutes–despite almost simultaneously publishing contradictory information to the public on the very same topic,” the brief alleges. “In doing so, WEC has embraced and promoted violations of Wisconsin election laws, created significant confusion about the absentee ballot voting process, and has usurped a core legislative function, or at the very least, failed to follow mandatory rule-making procedures. The circuit court should be affirmed.”

The case is Teigen v. Wisconsin Elections Commission, No. 2022AP91 in the Supreme Court of Wisconsin.