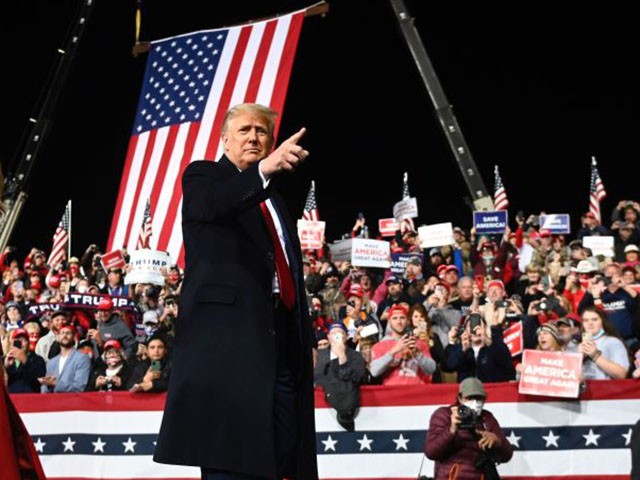 The rally will take place at Banks County Dragway in Commerce, Georgia, which is situated in a solid red county in northeast Georgia that Trump won by nearly 60 points in 2020.

Kemp has become one of Trump’s most sought-after targets since the 2020 election, which Trump narrowly lost — “by a whisker,” as Trump says — after two recounts in the closest race of any state in 2020.

Trump, who endorsed Perdue in December almost immediately after Perdue launched his campaign, has repeatedly charged that the 2020 election in Georgia was “stolen” and “rigged” and has taken aim at Kemp for leading a state in which he believes an unfair and fraud-ridden voting process played out.

The former president is now betting heavily on Perdue, persistently putting out public statements in support of his candidacy and throwing his weight behind other Georgia candidates who align with his mission to overthrow Kemp and Kemp allies.

Trump’s son Donald Trump Jr. appeared on the campaign trail on behalf of Perdue at the beginning of the month, and the former president held a high-dollar fundraiser for Perdue at Mar-a-Lago last week, from which Perdue’s campaign said it expected to raise more than half a million dollars.

In a lengthy statement following the fundraiser, Trump released a bulleted list of his grievances with Kemp, all relating to the 2020 election.

“A vote for RINO Brian Kemp in this primary is a vote for Governor Stacey Abrams. A vote for David Perdue is a vote to save Georgia from the Radical Left!” Trump stated, referencing the Democrat voting rights activist Abrams, who just barely lost to Kemp in Georgia’s 2018 gubernatorial contest and is now running again.

Perdue, who has so far been trailing Kemp in primary polls, has united with Trump in his stance about 2020 and made Trump’s backing a prominent feature of his campaign as he seeks to energize Trump’s base to turn out for the primary.

Walker, a former University of Georgia football star and Heisman Trophy winner, appears easily positioned in polls to win his Senate primary race. Walker is also endorsed by Trump and is gearing up for a competitive and expensive general election battle with incumbent Sen. Raphael Warnock (D-GA).

As for Jones, the avid Trump supporter who officially converted from Democrat to Republican in 2021 initially planned to run in the gubernatorial primary against Perdue and Kemp. Trump was successful, however, in convincing Jones to drop out of that race and instead jump into a congressional race, a move that was expected to consolidate support behind Perdue. Jones exited the gubernatorial contest in early February, just after Fox News reported that Jones had met with Trump and that Trump had offered him his endorsement if Jones instead ran for Congress.

In the span of a week, Patrick Witt dropped out of the Tenth Congressional District race to instead run for Insurance Commissioner, placed his support in the district’s packed primary race behind Jones — who had chosen to run in that district instead of running for governor, and then received an endorsement from Trump three days later.

A lawyer named John Gordon announced on March 16 a late challenge to Attorney General Chris Carr, who is a supporter of Kemp. In his announcement, Gordon zoned in on 2020, saying, “Georgia’s last election was rife with fraud, fraud that cost President Trump his victory.” A week later, Trump announced his endorsement of Gordon and bashed Carr for “doing absolutely nothing to stop the 2020 Presidential Election Fraud.”

Witt and Gordon are also scheduled to speak at Trump’s rally on Saturday.

Hice is challenging Secretary of State Brad Raffensperger, who drew perhaps the most ire of any Georgia official after 2020 over concerns of election fraud and mismanagement. Raffensperger served as chair of the five-member State Elections Board when the board changed various voting procedures in 2020 because of coronavirus surging and legal pressure from Democrats.

Kemp, who is wrapping up this year’s legislative session, which concludes March 31, is planning to spend Saturday morning speaking at a breakfast for the Columbia County Republican Party. Hice will also be present at that event.